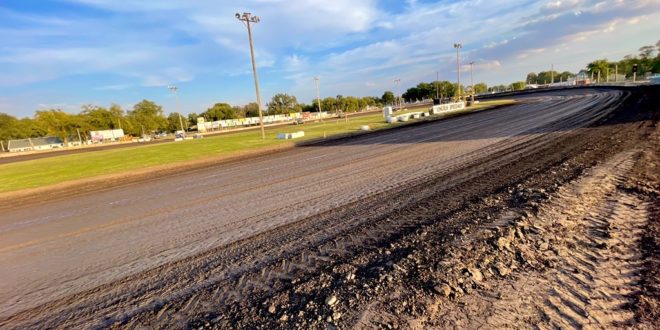 A warm, fall evening set the scene for practice night of the 26th annual DIRTcar Fall Nationals at Lincoln Speedway Thursday night. Thirty-five of the 37 cars on property took to the quarter-mile oval for several Hot Lap sessions in preparation for competition on Friday and Saturday.

The Pro Late Models have raced at Lincoln all season long and have been dominated by one man – the #1 ranked driver in the nation, Jose Parga. The New Berlin, IL-driver won seven of the nine Features contested at Lincoln this year but was bested in Hot Laps Thursday night by Mulberry Grove, IL’s Billy Knippenberg. This little battle could spill over into Friday and Saturday night Features, as they race for two $1,000 top prizes this weekend.

Lincoln’s UMP Modified division was ruled by first-time track champion Ray Bollinger, of Kewanee, IL, this season, who will be in-action Friday and Saturday night. Austin Friedman topped Thursday’s Hot Lap sessions, looking to bring the heat on Bollinger and the rest of the stout field expected for the two race nights. Kenny Wallace, Brandon Bollinger, Dave Wietholder, Brandon Roberts and more heavy-hitters have all pre-entered to compete, which could make for a very interesting season finale.

The Pro Modifieds had the most cars of any division pre-entered in the event at 19. Counting the new entries on Thursday, 24 cars total have now checked-in for competition. Jake Montgomery topped the Hot Lap chart on Thursday, but the nation’s top driver will be in the house come Friday night. Owen Steinkoenig, of Highland, IL, has won 15 Pro Modified Features this year and will push the rest of the field to their limit as they battle it out over both nights.

Friday night’s action begins with Hot Laps at 6pm for each of the four competing divisions – Pro Late Models, UMP Modifieds, Pro Modifieds and Stock Cars. Buy a ticket at the gate, bring the camper or watch every lap live on DIRTVision presented by Drydene.