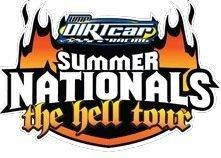 Conley, of Wheelersburg, Ohio, started on the inside of row one with Dustin Griffin on the outside. Conley pulled out to an early lead but relinquished it on a lap-17 restart to Jason Jameson, who had maneuvered his way to the front after starting in fifth. Jameson, who utilized the top groove to make his way to the front, stretched his lead over the rest of the field.

Jameson, of Lawrenceburg, Ind., dominated the next five laps and looked to be the car to beat, until his machine slowed on lap 23, letting Conley slip back in front. Conley then moved up the track and held off a late-race charge from Greg Johnson, who kept his car glued to the bottom and had a fender under Conley a few times but could never gather enough momentum to make a pass for the lead, letting Conley capture the $5,000 checkered flag.

“Jason definitely had us covered,” Conley said. “I kept thinking that outside would be good, but I was afraid to try it because I was leading and you never know what’s going on behind you. Once he jumped up there, I jumped up there and I thought ‘whew, no wonder he passed me.’”

Bobby Pierce shaved a few points off of Brandon Sheppard’s points lead after finishing third, one spot ahead of Sheppard. With two races remaining in the 2013 Hell Tour, Sheppard clings to a 43 point lead over Pierce with two events remaining.