Lebanon, Oregon- Despite four cautions and some moments where it looked like he might have lost the lead Russ Sell of Brownsville stayed out in front of the competition to win the finale in the Clair Cup on Sunday May 27th at the Willamette Speedway.  The chauffer of the 99.9 KRKT Cricket Country/Left Coast Motorsports #50 Swartz led all fifty laps in the feature to add to his 2010 Clair Arnold Memorial victory at the historic 1/3 oval located in Lebanon.

Starting on the outside front row Russ Sell held of his son-in-law Jeremy Shank of Salem, in the Leftcoast Motorsports/South Pacific Auto Center #30 Swartz, in the beginning of the race as well as towards the end when Shank would make a late charge.  Shank would slip back to third early after Terry Ferrando of Keizer in the Mastersbilt #12 3T Plumbing/Kartco Racing entry moved to get into second and for a moment had a run on Sell via the inside.

Sell was able to utilize the momentum on the high side in the exits of the turns to stay in front of Ferrando and would start to rebuild his lead.  A bit of a scary moment occurred when Sell got held up briefly in lapped traffic around the halfway point and it allowed both Ferrando and Shank to get within striking distance to challenge but a caution on lap thirty-four bunched the field back up.

In the remainder of the race two other cautions would occur and lap traffic would not be a factor and Russ Sell was able to go on to victory lane for the first time in 2012.  Jeremy Shank held on to second while Greg Walters in the T&G Trucking/Warpaint Motorsports Graphix #97 Victory Circle labored his was to third via a sixteenth place starting position.  Trevor Glaser of Tangent in the Mid Valley Farms/Crop Production Services #2 Victory Circle earned fourth after starting fourteenth and John Duty of Happy Valley completed the top five in his Don Frank Flooring/Elite Cabinets Plus #5 Rocket.

Trevor Glaser was fastest of the forty-nine cars on hand at a time of 15.156 seconds and Rick Wyatt of Aumsville won the trophy dash in the Elite Cabinets Plus/Don Frank Flooring #24W Rocket.  Heat race winners were Britton Donahoo of Salem in the O&O Farms #5B Mastersbilt, the Xtreme Motorsports/Hot Rod Betties Tattoo #21 Mastersbilt of Steve Moore from Scio, Sodaville’s Tory Swayngim in the Art Plus Signs and Designs #55 GRT, Jeremy Shank, and the Kartco Racing/Schram Brothers Excavating #41 Mastersbilt of Jason Wines from Lebanon.

Two consolation features were run for twenty laps with the top three in each transferring to the feature.  In first race the Schram Brothers Excavtating #22M of Mike Miller from Springfield earned the win while Billy Workman Jr. currently living in Mooresville, North Carolina finished in second in the Vitale Racing/Wirth Wireless #64 Mastersbilt entry and Brian Cronk now, living in Corvallis, made a last lap pass to grab the final transfer position in the Metro Services/Big Sky Landscaping #29 Rocket.  In the second event Greg Walters and La Pine driver Trent Elliott finished first and second and John Campos of Keizer managed to finish in third piloting the Herbalife/Harold’s Automotive #36 X-Factor.

The Saturday May 26th feature was a nail-biting forty lap affair with Greg Walters and Rob Mayea of Bend, in the J&S Farms/Cornett Racing Engines #37 Victory Circle, battling with one another.  Walters took the lead from his pole starting position and had the field covered until the yellow flag was waived on lap two to bunch the field up.  It was a couple laps after the restart that Mayea seized the lead from Walters and started to pull away.  Despite a few more cautions and a few challenges from Walters Rob Mayea held on to win the first night of action.

Greg Walters would finish in a respectable second place and Brady Sell of Salem would finish in third in the South Pacific Auto Center/Left Coast Motorsports #4 Swartz.  The rest of the top finishers consisted of Russ Sell and Tim Goodwin from Lebanon in the Mega Foods/Kartco Racing #89 Mastersbilt.

Fast time of the night was Rick Wyatt at a time of 16.247 seconds out of fifty-two cars, Brady Sell won the trophy dash, and the heat race winners were Chris Mott of Salem in the Woodworking Enterprises/Airport Steel  #16M Rayburn, the Mark’s Auto Body #26 Victory Circle of Redmond’s Mark Carrell, Jon Kaufman from Lincoln City in the Central Coast Ready Mix #27 Victory Circle, Jerry Schram of Vancouver, Washington chauffer of the Schram Brothers Excavating/Century III Stables #16 Mastersbilt, and Russ Sell.

Two consolation races that lasted for twenty laps transferred the top three to fill in the final six positions for the feature.  In the incident filled first race Trevor Glaser was the winner with the Workman Jr. in second and Casey Vitale of Albany in third in his Trademark Transmissions/Cottage Grove Yamaha Motorsports #3V X-Factor.  In the second race Jeremy Shank was the winner bringing with him to the feature Jason Wines and the Ireland and Ireland at Law/Privateer Racing #8 Rayburn of Rob Ireland from Banks in third.

Late Models return in action for the prestigious Strawaberry Cup presented by Napa Auto Parts on Saturday June 2nd.  Also in action will be the USRA Modifieds, Sportsman, Classic Sportsman, and Mini Trucks.  For more information log on to the track website at www.trophymotorsports.com or stay up to day on your mobile device by “liking” us at the official Facebook page at www.facebook.com/trophymotorsports. 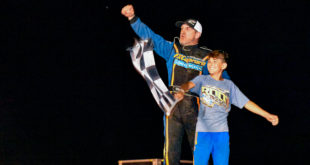 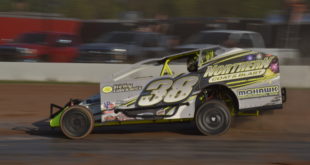 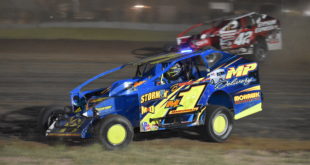