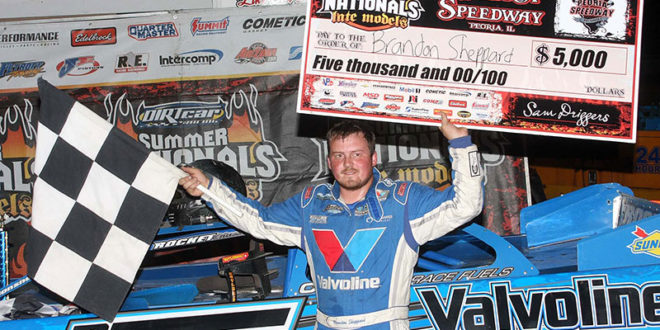 Sheppard started the 40-lap feature up front next to Sunday winner Brian Shirley, who was looking to join Rick Eckert and Billy Moyer as the only multiple race winners so far this season. Unfortunately for Shirley, Sheppard rocketed past the pole-sitter at the drop of the green flag, using the outside line to grab the lead and never let Shirley lead a lap. After securing the top spot, Sheppard pulled away from Shirley, who found himself battling Bobby Pierce for much of the race.

Pierce, last year’s runner-up to Sheppard in the championship, managed to get around Shirley for second on lap 32, but Sheppard had already built an insurmountable margin. Sheppard went on to dominate, leading all 40 laps en route to capturing the $5,000 checkered flag.

“We’ve been waiting for things to fall into place,” said Sheppard, of New Berlin, Ill. “Finally they did. I’m pretty confident going into the rest of [the DIRTcar Summer Nationals season] now.”