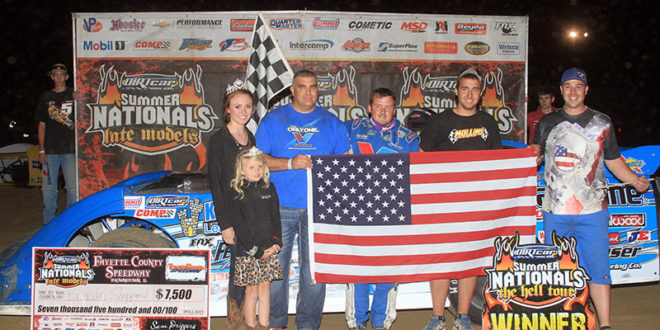 BROWNSTOWN, Ill.  July 4, 2014  2013 DIRTcar Summer Nationals champion Brandon Sheppard may of not had the fastest car Friday night, but he had the lead when the track began to take rubber and passing became difficult, helping him score the $7,500 checkered flag at Fayette County Speedway.

Sheppard would lead the field to the green flag with Wednesday nights winner Jason Feger starting on his outside. Sheppard started the race by clearing Feger for the lead on the opening lap, but made the mistake of moving to the high-line on lap two, opening up the faster bottom line for Feger to overtake Sheppard for the lead. Feger dominated the next 10 circuits, as Sheppard finally switched his line back to the bottom.

As the night went on, the track became more difficult to pass on as the rubber began to build up. Sheppard mounted a charge on lap 12 and reclaimed the lead from Feger, as they lined up nose-to-tail with points leader Shannon Babb and Billy Moyer on the single grove of racing, causing a traffic jam at the front of the field for the lead. All the leader had to do was make his way through slower traffic in order to coast to the victory. That was not so easy for Sheppard.

With just three laps left, two lapped cars made contact in front of the leader, causing Sheppard to slow down and giving Feger a chance to make a go-for-broke pass for the lead. Feger dove into the corner trying to clear Sheppard and become the first three time winner of the 2014 DIRTcar Summer Nationals season, but came up just short as Sheppard maintained the lead.

Sheppard lead the final two laps without any problems and secured his second win of the season, and ninth of his career, as he claimed the checkered flag at Fayette County Speedway.

We had an awesome car all night long but we were fortunate to get back to victory lane, said a relieved Sheppard in victory lane. I went to the top (groove) right off the bat, which was dumb, and Feger got by us for the lead. But we were lucky we had a decent tire package on that allowed us to really get in there and roll that bottom pretty good after my crew guy told me to go back down there, and we were lucky to pass Feger (for the lead) before the rubber came in.

Moyer, Babb, and Ryan Unzicker rounded out the top five.