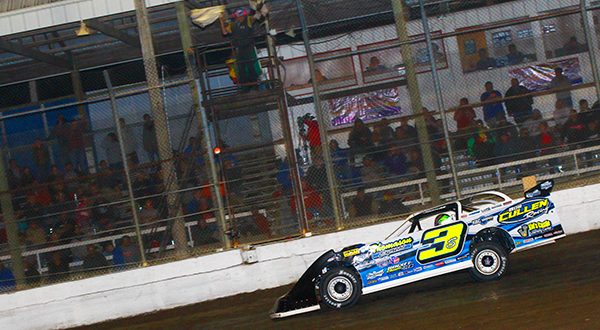 CONCORD, NC — Jun. 24, 2018 — Brian Shirley took command of the DIRTcar Summer Nationals tour during Legends Week with victories at Spoon River Speedway and Fairbury Speedway. Now he and all of the DIRTcar Late Model drivers turn their focus to a couple of make-up events from the previous two weeks — Tri-City Speedway on Tuesday, June 25 and Peoria Speedway on Wednesday, June 26 — before officially commencing the aptly named Challenge Week on Thursday, June 27 at Brownstown Speedway.

On the DIRTcar Summit Racing Equipment Modified Nationals campaign, the tour has seen four different winners in four events, with defending champion Mike Harrison picking up his first win of the 2019 campaign on Saturday night at Fairbury Speedway.

While Mother Nature has had the most success this season, the intensity is about to increase with 14 races in the next 14 nights thanks to several events that will be made up on previously scheduled off days. Here’s a look at where things stand:

Jacksonville Speedway (IL) – Tuesday, June 18: Defending World of Outlaws Morton Building Late Model Series Champion, Brandon Sheppard, the 2013 DIRTcar Summer Nationals Champion, moonlighted in his family owned ride while off from the Outlaws and scored his 19th career Hell Tour triumph of his career. With the victory, the 26-year-old start from New Berlin, IL moved into a tie for ninth all-time with 2010 Summer Nationals Champion Jason Feger on the career win list.

Mother Nature – June 19, June 21 June 23, June 24: Nobody has had more success on the Summer Nationals tour this year than Mother Nature. While not behind the wheel, she has had an unrelenting impact on this year’s tour, winning eight times in the first 12 races.

Jacksonville Speedway (IL) – Tuesday, June 18: Allen Weisser, who earlier in the night finished eighth in the DIRTcar Late Models Feature, jumped into his DIRTcar UMP Modified and on the opening lap took the lead from his second row starting spot and sailing to the win. The 26-year-old from Peoria, IL grabbed his second career Summit Racing Equipment Modified Nationals checkered flag to go with his first win back on June 22, 2018 at Tri-City Speedway (IL).

Spoon River Speedway (IL) – Thursday, June 20: The 2016 DIRTcar Summit Racing Equipment Modified Nationals Champion Nick Hoffman dominated for his first victory on the tour since July 28, 2017 at Fairbury Speedway (IL). It was the 14th tour victory for the 27-year-old from Mooresville, NC, moving him into sole possession of second place all-time.

Fairbury Speedway – Saturday, June 22: Six-Time and defending DIRTcar Summit Racing Equipment Modified Nationals Champion Mike Harrison continued his impressive streak of being the only DIRTcar UMP Modified driver in the series’ nine-year history to score a win every year of the series as the Highland, IL standout scored his first of 2019 and 46th Summit Racing Equipment Modified Nationals triumph of his career

On Monday, June 24, the teams from both tours make their only visit to the Volunteer State at Clarksville Speedway (TN) in the Late Models 22nd all-time event, which pays $5,000 to win and the Modifieds ninth appearance for a $1,000 payday. Legends Week ends on Tuesday, June 25 at Tri-City Speedway (IL) for a makeup date for both tours as the Hell Tour Late Models vie for $10,000 to win while the Summit Mods race for $1,000, thus concluding Legends Week.

On Wednesday, June 26, the makeup date at Peoria Speedway (IL) for the 19th (Late Models) and ninth (Modifieds) appearances all-time briefly resumes the Northern Kickoff Week. It’s $5,000 to win for the Late Models and $1,000 to win for the Modifieds. Then Challenge Week begins at Brownstown Speedway (IN) for what is now the first appearance of the season in the Hoosier State on Thursday, June 27, for a $5,000 payday and the first race at Brownstown since the 2017 tour opener and 14th all-time event for the Late Models, sixth for the Modifieds, who will go after a $1,500 payday.

The teams stay in Indiana and head to Terre Haute Action Track (IN) on Friday, June 28. The World of Outlaws Morton Buildings Late Model Series join their Summer Nationals counterparts for a $10,000 paycheck in the seventh all-time event at the legendary oval. The Modifieds will make their sixth all-time trip and race for $1,500 as this event will be the last race in the state of Indiana for both tours in 2019.

The second $10,000 to win show of the week will be held at Highland Speedway (IL) on Saturday, June 29, as the DIRTcar Late Models mark their 21st all-time event there. The DIRTcar UMP Modifieds race for their third straight $1,500 check in their eighth career event there. On Sunday, June 30, the teams then venture to Lincoln Speedway (IL) for a $5,000 to win show for the Late Models and the fourth straight $1,500 to win event for the Modifieds to conclude Challenge Week.

New in 2019, every DIRTcar Summer Nationals and Summit Racing Equipment Modified Nationals event will be broadcast LIVE on DIRTVision.com with a DIRTVision Late Model Fast Pass powered by DirtOnDirt. For the latest news, follow the @SummerNationals on Facebook and Twitter. The Summit Racing Equipment Modified Nationals runs parallel to the DIRTcar Summer Nationals. Information on the Late Models can be found at thehelltour.com; information on the UMP Modifieds can be found at modifiednationals.com.