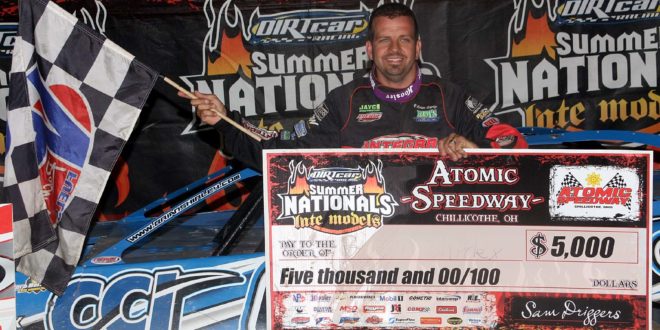 Shirley started the feature event in the third position behind front-row starters Duane Chamberlain and Delmas Conley. On the races opening lap, Shirley quickly made his way to the lead by rocketing around both drivers before either had a chance to lead a single lap.

Conley fell back through the field, eventually settling for an 18th place finish. Chamberlain stayed glued to the leaders back-bumper for the first handful of laps, as he challenged Shirley for the top spot on several occasions. Shirley had trouble pulling away from Chamberlain in the early laps of the race, but by lap 18 the leader began to inch further from the field after finding a faster line higher up the track.

Shirley had the car to beat, eventually building a lead of over two-seconds on second-place, but in the final stages of the event his car began to overheat. The leader suffered a punctured hole in his radiator, turning his car into a ticking bomb waiting to explode. Shirley continued on, never surrendering the lead during the duration of the event, and surviving an overheating engine to claim his third victory of the 2014 DIRTcar Summer Nationals season at Atomic Speedway.

Its nice to still have a shot at the championship, but were not worrying about the points deal, said Shirley, who last won at Clayhill Motorsports Park on June 26. We just came out here to try to win races and make as much money as we can – so were just gonna try to win the rest of the races and let the points fall where they fall.

If the battle atop the championship standings wasnt close enough before the race, it has since gotten closer. Points-leader Shannon Babb started the feature in the eighth position, six spots better than Ryan Unzicker who trailed Babb in the standings by 41-points heading into the night.

On lap 29, Babb managed to climb to the fifth position and was slowly working his way to the front of the field when his car suddenly slowed on the front stretch. Babb was forced to retire following mechanical issues, giving Unzicker the opportunity to gain ground on the points-leader. Unzicker took advantage, finishing the night in the seventh position, and cutting Babbs points lead to 26-points.

After capturing the win on Wednesday night, Brian Shirley now sits third in the championship standings only 45-markers behind Babb for the top spot and 19 behind Unzicker for second. The championship battle now becomes a three driver fight with three races remaining.