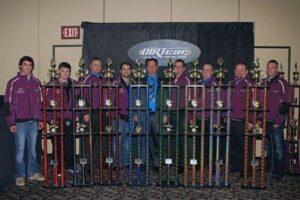 Over $350,000 In Points-Fund Cash Distributed To Drivers During Gala Event Commemorating 2012 Season

Shirley, 31, entered the DIRTcar UMP Late Model history books in 2012, becoming just the third driver to win the organization’s Summer Nationals ‘Hell Tour’ and weekly series national points titles in the same season. His sweep earned him the lion’s share of the $45,200 in points-fund checks he collected on Saturday evening.

The 22-year-old Gilpin, meanwhile, accomplished his 2012 objective, winning his first UMP Modified weekly series points title with one of the most spectacular campaigns the open-wheel division has ever seen. He won a circuit-leading 36 features en route to a total points-fund payoff of $21,600 for his season-long efforts.

Nearly 900 attendees from more than a dozen states and Canada watched as DIRTcar Racing officials distributed over $350,000 to the champions and top performers who raced under the DIRTcar UMP banner in 2012.

“It definitely was my best, most consistent all-around season,” said Shirley, a fulltime professional driver who drove self-owned equipment to his historic season. “My wife and kids brought a lot more meaning to the situation, a lot more of what you’re fighting for. When you go out and do your job it’s just not you anymore. It’s your family, so you put a lot more emphasis on what you’re doing every day.”

Shirley’s 2012 log showed 12 wins (at eight different tracks in Illinois) and 43 top-five finishes in 71 DIRTcar UMP-sanctioned starts. He picked up $25,000 for the ‘Hell Tour’ title, $20,000 for the national crown and $200 for finishing sixth in the Illinois State points standings.

Gilpin wore one of the night’s biggest smiles after accepting accolades for a UMP Modified national championship he’s dreamed about virtually his entire life. He followed his grandfather Don Fleetwood, who fielded Gilpin’s race car, and father Todd into the seat of a UMP Modified.

“It’s a pretty humbling experience,” Gilpin said of putting a huge exclamation point on a UMP Modified career that he began at a fresh-faced teenager in 2005. “Being a kid growing up in a racing family, and watching your grandfather and dad – to win 36 races and a national championship is really hard to explain.

“I can’t thank my grandfather enough for giving me the opportunity I’ve had. It’s just something really special and I’ll never forget it.”

After back-to-back runner-up finishes in the national UMP Modified standings in 2009 and ’10, Gilpin beat Nick Allen of Wheatfield, Ind., by 40 points (2,346-2,306) in the points battle, which was determined using drivers’ best 30 finishes/points nights. His 36 feature wins came at 13 tracks in four states and he registered a total of 56 top-five finishes in 82 starts during the points season.

Gilpin’s $20,000 national title check was accented by the $800 he earned for finishing third in the Ohio/Pennsylvania State points; $500 for placing fourth in the Indiana State points; and $300 for 12th in the Summit Racing Equipment UMP Modified Summer Nationals.

The Summit Racing Equipment UMP Modified Summer Nationals championship was claimed by NASCAR driving veteran and television personality Kenny Wallace, who attended the banquet to accept a trophy he will forever hold high on his list of accomplishments.

“It’s my first championship ever,” said Wallace, “so it means a lot.”

Wallace, who competes in selected UMP Modified events when his NASCAR commitments allow, earned $2,000 for the Summit Racing Equipment title and another $725 for finishing 18th in the UMP Modified national standings.

The night’s third-largest national championship check was presented to Bobby Dauderman of Alhambra, Ill., who pocketed $10,000 for capturing the DIRTcar UMP Pro Late Model title. The 25-year-old driver, who makes his living as a maintenance worker at a construction company, also collected $200 for finishing third in the Southern States standings.

Jake Hewitt, 29, of Troy, Ill. (Factory Stocks) and Evan Gaultney, 18, of Madisonville, Ky., (Sport Compacts) were honored as the national champions of DIRTcar UMP’s entry-level classes, which debuted in 2007. Hewitt, who works as an auto body technician, captured 11 features in ’12 while Gaultney – a senior student at Hopkins County Central High School who was the youngest DIRTcar UMP national champion in 2012 – rang up 32 victories en route to his first points crown.

Both drivers earned $1,000 for their national titles; Gaultney added a $200 check for winning the Sport Compact Southern States points crown.

Dustin Griffin, 26, of Camp Point, Ill., received a $1,000 check for winning the 2012 DIRTcar UMP Late Model Rookie of the Year award. He captured 10 features and finished 11th in the national standings.

A number of special awards determined by a vote of the DIRTcar UMP membership were handed out:

* Aaron Faugust, who turns the wrenches on Shirley’s Late Models, and Don Fleetwood, Gilpin’s grandfather, car owner and crewchief, were presented the Mechanic of the Year awards.

* Tri-City Speedway in Pontoon Beach, Ill., was announced as the DIRTcar UMP Track of the Year.

Former DIRTcar UMP Late Model national champion Bob Pierce received the eighth annual Bob Memmer Achievement Award, which honors the memory of the circuit’s late founder. The resident of Oakwood, Ill., is a huge figure in DIRTcar UMP’s history, not only as a driver but also in his current role as a high-profile chassis builder and the father of up-and-coming teenage Late Model racer Bobby Pierce.

Adding to a big night for Pierce, he also was honored as the 2012 Late Model national champion chassis builder and the UMP Modified division’s Chassis Builder of the Year. Pierce-constructed UMP Modifieds registered 139 sanctioned feature wins in ’12.

The banquet began for the fifth consecutive year with an awards ceremony for the top drivers in the Kid Modz division, a four-cylinder version of a UMP Modified that car builder Bob Pierce launched to help bring youngsters into the sport. Cole Sellers of Breese, Ill., was celebrated as the division’s 2012 champion.

Appreciation plaques were presented on Saturday to promoters or representatives from the nearly two-dozen DIRTcar UMP-sanctioned tracks who were in attendance. Promoters met earlier in the afternoon with DIRTcar UMP officials to discuss the organization’s plans for the 2013 season.