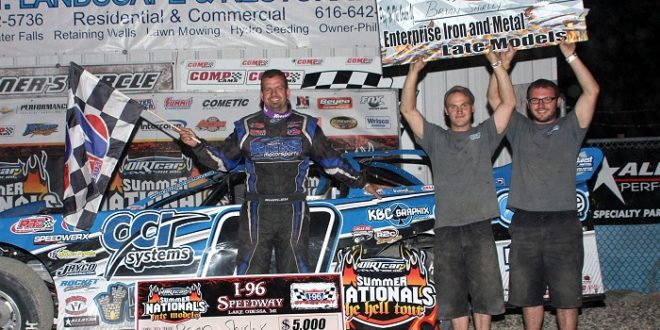 LAKE ODESSA, Mich. – June 22, 2014 – Brian Shirley rallied from a blown engine in hot laps, and then held off a red-hot Shannon Babb to capture his first victory of the 2014 DIRTcar Summer Nationals season Sunday night at I-96 Speedway.

Shirley, the 2012 DIRTcar Summer Nationals champion, dominated the 40-lap main event, leading every lap from flag-to-flag, as well as setting quick time for the night and winning his heat race.

Shirley started the feature from the pole-position and grabbed the lead early. Babb, who started four positions behind Shirley, needed only eight laps to make his way to second and 20 laps to reach Shirley’s back bumper. Babb, who has dominated I-96 Speedway, winning four of the last five races held there during the Summer Nationals, found no luck getting around Shirley as lapped traffic came into play in the battle for the lead.

Shirley held a firm grip on the top spot, managing to lead every lap in a caution free feature, capturing the $5,000 checkered flag, his first of the season and 13th of his career.

“Tonight I was a little heartbroken,” said a relieved Brian Shirley in victory lane. “We were fast in hot laps I felt like, and had to pull that car out because of mechanical problems, but glad it all worked out.”