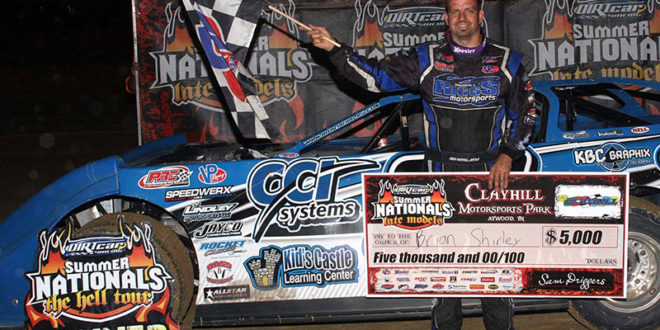 Shirley, who picked up his first win of the season at I-96 Speedway Sunday night, found himself starting on the outside of Culp, who was looking to become the first Louisiana native to win a DIRTcar Summer Nationals feature. Culp quickly pulled away from Shirley and the rest of the field on the start of the race, looking to be the car to beat for most of the 40-lap A-Main.

Shirley slowly began to reel in Culp after his car began to slow battling lap-traffic, and eventually blew past the leader on lap 34, as Culp’s car was clearly suffering from mechanical problems. Culp’s car broke a water-pump early in the feature event, eventually leading to his motor frying, and ending his dreams of capturing his first career DIRTcar Summer Nationals victory.

Shirley dominated the final six laps, compiling a lead of 2.76 seconds over Bobby Pierce, rolling to an unlikely victory and claiming the $5,000 checkered flag at Clayhill Motorsports Park. Culp limped to a sixth place finish after leading races opening 33 laps.

“It was just a matter of time,” said Shirley, referring to when he would be able to pass Culp for the lead. “Things happen, we were just able to be in the right spot at the right time tonight.”