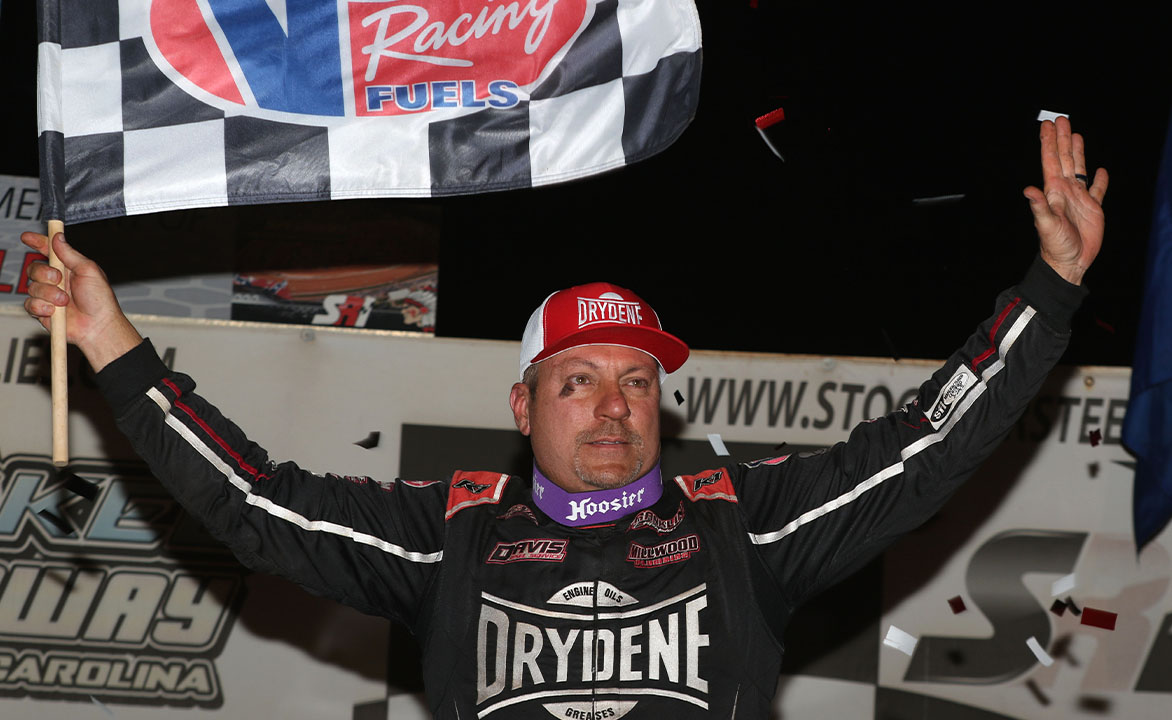 Chris Madden faced the same decision every driver had to make Sunday at Cherokee Speedway. Either pit and give up valuable track position or stay out and hope your tires last until the end.

The Gray Court, SC driver’s choice to stay out paid off, as he outlasted a hard-charging Brandon Overton with fresh tires to win his seventh Blue Gray 100 during the Drydene Xtreme DIRTcar Series’ opening weekend. Madden, the defending series champion, had just enough left on his right rear tire to pull away from “Big Sexy” on the final restart, cementing his 28th career Victory at “The Place Your Mama Warned You About.”

“Smokey” stated it shows the stride his team’s been hitting during the final few weeks of 2021.

“[The win] says a lot about our team here at the end of the year,” Madden said. “We definitely made some huge headways here in the last few weeks, and I’m really proud of where I’m at right now, so anytime we can win with a field of cars like we have here today, it’s pretty good.”

Madden conserved during the first half of the race, patiently waiting to make his move. He slid into second with 45 laps to go and pushed Ross Bailes until the Clover, SC driver, slowed with a flat tire, handing Madden the lead with 21 laps remaining.

From there, it was a cat and mouse game with Overton, who was searching for his second consecutive Blue Gray 100 win.

“It’s tough here to get a win, and the number one guy in the country is here, and those guys have been amazing all year,” Madden said. “We came here to be competitive and do the best we can do, and we got here, did a little bit of work, and I’m just really proud of my guys and my car right now.”

Overton settled for second after changing all four tires during a caution with 35 laps to go. “Big Sexy” thought a red flag involving multiple cars early in the race helped drivers save their tires longer than they expected.

“I think what saved a lot of people was that red when we sat out there, and it got dark,” Overton said. “That probably saved five or six laps for them.”

“We just came up one spot short, and really I think I could’ve got [Madden], but a lap car killed my momentum getting into three, and I had to slide a little bit. It is what it is, he did a good job, and it wasn’t meant to be.”

Devin Moran, who drove the Jeremy Bullins owned Longhorn Chassis for the first time, finished third. The Dresden, OH driver was happy with his performance despite driving an unfamiliar race car.

“I’m just glad we didn’t have any major problems or anything,” Moran said. “I felt like we were off just a little bit, but we have a little bit different engine package than I’m used to, so we’ll tune on it a little bit, and I hope we get to race in it a little more next year.”

Carson Ferguson finished fourth, his second straight top five on the Series, and Michael Brown rounded out the top five.

After a win at Lancaster Motor Speedway and a seventh at Cherokee, Ross Bailes leads the Drydene Xtreme DIRTcar Series standings. Ben Watkins and Carson Ferguson are tied for second—three points behind “The Boss.”

If you can’t make it to any Drydene Xtreme DIRTcar Series events, tune in live on DIRTVision – available either online or through the DIRTVision App.