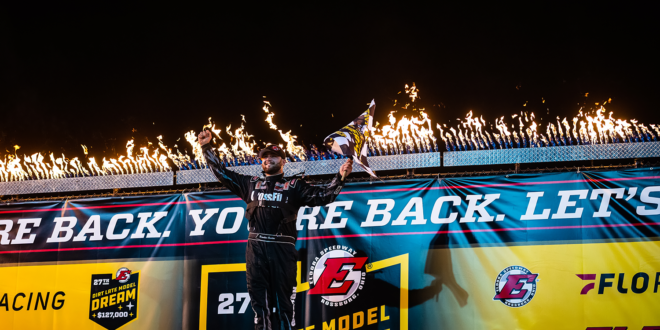 Two of the winningest drivers on today’s Dirt Late Model circuit wrote another chapter in their big book of 2021 success stories Wednesday night at Eldora Speedway.

Brandon Overton and Jonathan Davenport struck first over the 74-count DIRTcar Late Model field by scoring victories in the 27th Dirt Late Model Dream twin-25s, putting themselves in great position for a chance at the $127,000 top prize in Thursday’s finale.

Under the Every Lap Matters format, each driver scored points for their finishes in the Heat Races and Features, which will be used to set Thursday’s Heat Race lineups. Both Overton and Davenport won their Heat Races, which will set them atop the standings coming into the big show.

Davenport’s son spun the inversion wheel in Victory Lane following his Feature to determine the number of positions inverted in Thursday’s Heats and landed on a ‘2,’ which will essentially flip the front-row starters for each Heat Race.

In motorsports, catching an opponent and passing them are two different things. Brandon Overton did both Wednesday night en route to his $10,000 victory.

Overton, of Evans, GA, jetted out to third from his fourth spot on the starting grid and made a beeline for the lead right out of the gate. Forced to chase down Kyle Bronson, Overton looked low on his orange #40B and made the move for second on him with a power move to the inside as they completed Lap 12.

A quick caution came just one lap later and erased the small gap polesitter Stormy Scott had put between he and the others. But the restart almost cost Overton dearly as he and Scott touched ever so slightly in Turn 1.

“That restart down there – I had it, like at the flag stand we were nose-to-nose, and I was like ‘I’m gonna go on in there,’” Overton said. “And then I thought about it before I let off and was like ‘he’s gonna come in here with me because he wants to win bad.’ So, I just lifted.”

But despite Scott’s ambition to get his first win at Eldora, it seemed that it just wasn’t meant to be Wednesday night. While he and Overton battled for several laps out front, Scott’s reign came to an end as he got a little too high on entry getting into Turn 1 on Lap 22 and caught the fluff sitting next to the wall, dragging him in and eventually to a stop to bring out the yellow.

Overton had a big run on him lined up for several laps and pulled the trigger right on that same lap.

“I went on in there and I didn’t see him, and I was like ‘dang, I must’ve cleared him by a mile.’ And then they threw the caution for the 2S,” Overton said.

Going back to green, it was all Overton to the finish, marking his fourth career Eldora crown jewel prelim victory in the last four years.

“[This is] a brand-new car – first night on it. We set the brakes in it when I was hot lapping, and it was really good. Hats off to everybody at Longhorn and Wells [Motorsports] – the thing was good,” Overton said.

He’s been one of the men to beat over the past 2-3 years at Eldora, and Jonathan Davenport showed exactly why with a dominating flag-to-flag victory Wednesday night to pick up $10,000 in the second prelim Feature of the evening.

“This might be the best car I’ve ever drove around here,” Davenport said after the race. “It was really good. I could run right through the middle, I could run on the wall… I don’t know how much I would slow-up when I wasn’t running around the inside wall – she run around there pretty good.”

Davenport, of Blairsville, GA, set quick time overall, won his Heat Race and led all 25 laps of the Group B Feature without any serious challenges for the lead out front. However, the race for position behind him was on.

NASCAR star and Eldora Four Crown Nationals winner Kyle Larson showed tons of the strength he was expected to show in his Eldora Late Model debut, qualifying up high and mixing it up with the leaders in the Feature as well. He made it up to second at one point before a caution was thrown and he was forced to go back. He faded a bit later on and dropped back to an eighth-place finish.

Jimmy Owens ran solidly in second all race long, never letting the battle going on behind him with Jacob Hawkins, Mike Marlar and Brian Shirley get to him. At one point in the race, they battled four-wide in Turns 1-2 after a restart.

In the end, Hawkins settled into third with Marlar and Shirley fourth and fifth. With this kind of competition he faced in his group, even Davenport himself reflected a bit on the difficulty of competing at this level.

“These guys that we race against are so good. If you’re off just a little bit and then you start chasing yourself, they’re just gonna get better and you’re gonna get worse,” Davenport said.

The 27th Dirt Late Model Dream finale gets underway Thursday night at Eldora Speedway with Hot Laps beginning at 6:30pm Eastern. $127,000 is on the line for the winner – be sure to follow DIRTcar across all social media channels for all the updates.