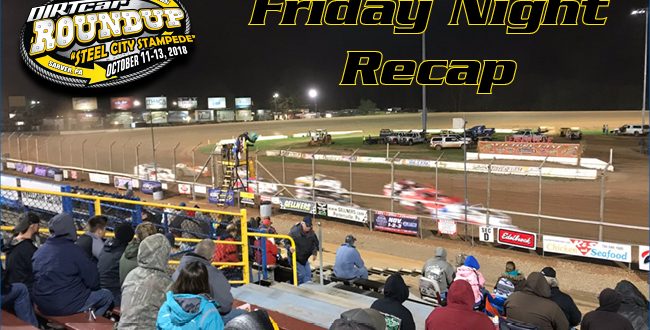 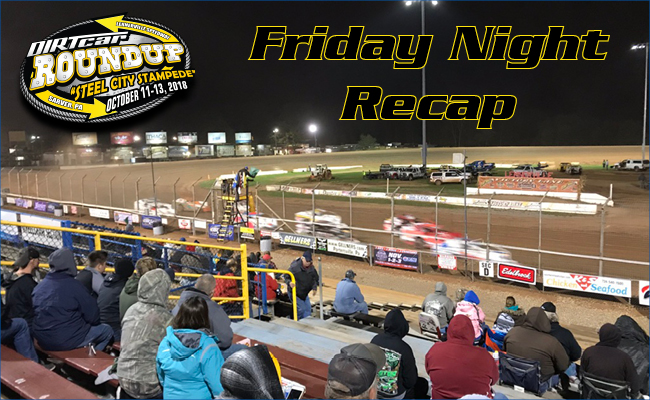 SARVER, PA – October 12, 2018 – 255 racecars were in the Lernerville Speedway pit area on Friday night for the 10th edition of the DIRTcar Roundup “Steel City Stampede.” A chilly 45-degree evening played host to 24 heat races around the 4/10-mile, before a slight shower moved in over the area, moving the remaining two 270 Micro-Sprint heats to Saturday, before the last chance showdowns.

Just shy of 100 campers joined the fans out in the parking lot, making for a nice bonfire presence at the end of the night…

Twelve divisions of cars made for a very entertaining night of heat racing at “The Action Track,” and the four DIRTcar house classes were certainly no exception.

The DIRTcar Open Pro Stocks were up first for their three heat races. Top four went to the re-draw, top six transferred to the feature. Everyone else goes to the last chance showdown on Saturday.

The superstars of the DIRTcar Super Late Model division all gathered at the Eldora Speedway on Friday night in the hopes of getting World 100 night number two of three in the books. After getting the final two thirds of the event washed out by Mother Nature back in September, the rest of the racing action was moved to this weekend. However, the show was postponed yet again to Saturday, meaning two complete shows will need to be run today in order to have smooth sailing for the World of Outlaws Sprint Car Series event on Sunday.

Meanwhile, another group of Super Late Models gathered in Sarver for the mostly rain-free show, where a total of 18 cars ran two heats. All cars qualified for the feature, top four went to the re-draw.

Most of the DIRTcar Northeast Big-Block Modified superstars were in Brockville, Ontario, Canada on Friday night for the Super DIRTcar Series event at the Brockville Speedway. Twenty-one others decided to come to Lernerville for three heat races, top four went to the re-draw.

The DIRTcar UMP Modifieds rounded out the DIRTcar action for the evening with their three heat races. All cars qualified, top five cars went to the re-draw.

The racing action resumes today, October 13, with the 270 Micro-Sprint Car heats at 4 p.m., last chance showdowns to follow. Re-draws will take place at 2 p.m., grandstands will open at 3.

Saturday evening will also include the return of the 100-lap Enduro race after all 12 other classes have completed their feature events. Tech inspection for the Enduros begins in the parking lot at noon.