The 2011 DIRTcar Round Up Steel City Stampede is no One Trick Pony! 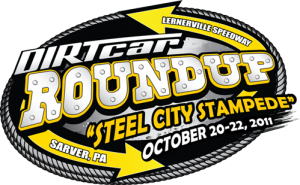 It’s “Fab Four plus Four” headlined by the Ti22 Sprints, Precise Lates and Diehl/BRP Mods racing for $3,000-to-win in each division!
Sportsman/Stocks, Pro Lates and UMP/UEMS Mods vying for $1,000-to-win

Sarver, PA (October 19, 2011) In just its second season of competition, the 2010 DIRTcar Round Up Steel City Stampede made Lernerville Speedway history by overflowing the newly expanded pit area and pitting cars in the Action Track infield for the first time in the rich 43+ year history of Don Martin’s Lernerville Speedway! Over 220 cars filled nine divisions last year (recall that the Mini Late Models ran an exhibition here last year) and when the Enduro crowd rolled in on Saturday Night the car count ballooned to over 300 cars!

General Manager Gary Risch Jr. recalls, “It was a good problem to have, but I don’t think anyone ever expected this event to grow this big that fast! To see cars pitted in the infield was an awesome thing! But as cool as that was, the racing on the track was even better!”

That said, better is a matter of perspective! The Ti22 Sprints are an imperfect 0-2 in Steel City Stampede features! Cole Duncan shocked the Western PA Sprint scene in 2009 with a last lap, last turn pass on All Time Sprint Wins Leader and then recent Century Club member Ed Lynch Jr. to steal the first DIRTcar Round Up Steel City Stampede Belt Buckle. Then last year, former Track Champion Dale Blaney stole the $3,000 show, making it back-to-back wins for the state of Ohio! Recently crowned Track Champion Carl Bowser will join fellow Western PA Winged Warriors Danny Holtgraver, Ed Lynch Jr. and others in the pursuit of keeping the Stampede Belt Buckle within the Keystone State!

Matt Lux won the Inaugural Precise Late Model feature in 2009, his first win in over two years at the time. Then last year, Jared Miley scored his third win in four races to finish the 2010 season. It will be interesting to see if someone like Lynn Geisler, Ken Schaltenbrand or Alex Ferree can find their way back to Sheetz Victory Lane after a long hiatus like Lux did in 2009, or if a multiple time winner like Dave Hess Jr., Gregg Satterlee or Chub Frank put a cherry on top of their 2011 season like Miley did in 2010!

Last year’s BRP Modified Tour Finale during the Steel City Stampede was a barnburner with Chad Homan banging doors with multiple-time BRP Series Champion Rex King Sr. to take the checkers, a $3,000 payday and a shiny, new Stampede Belt Buckle. Del Rougeux Jr. won the inaugural event in 2009, but has not climbed into the #20D at the Action Track in 2011 after losing his father in the off season. Word around the pits last Saturday Night at PPMS was that Rougeux will be back in action in 2012; here’s hoping he gets a jumpstart on the 2012 season this weekend! Rex King Sr. will be looking to secure his third straight BRP Crown and fifth overall. Kevin Bolland is second in points.

Joe Kelley picked up his 10th Pic-A-Part Sportsman/Stock feature of 2010 at last year’s Steel City Stampede, but the field caught up to the future Hall of Famer in 2011 and “Super Joe” will be looking for just his third feature win of 2011. Rusty Martz won the inaugural event in 2009.

As previously released, Precise Racing Products will offer a discount of 10% on all racing parts and an unprecedented 5% off of all Hoosier Racing Tires to be used during the Stampede. The store will also offer a 50% discount on all closeout merchandise, making it the perfect time to stock up before the offseason! The sale will run throughout the event, from Thursday, October 20 through Saturday, October 22.

Precise Racing will also provide gift cards to be given away to 20 lucky race teams and fans! Gift cards can be used on any available products, including popular Hoosier Tire racing apparel that will be on hand at the track.

Precise Racing Products is located at 110 S. Pike Road in Sarver, PA, one mile south of Lernerville Speedway on Route 356. For more information, call 724-360-8000 or log on to www.PreciseRacing.com.

We will also be hosting the Pittsburgh Circle Track Club’s Annual Fall Parts Flea Market on Saturday morning from 9:00AM-1:00PM in the upper lots. There is no setup charge or fee to sell parts, but you must provide your own tables. For more information call Cheryl at (724) 584-1634; you are welcome to leave a message if she cannot answer your call.