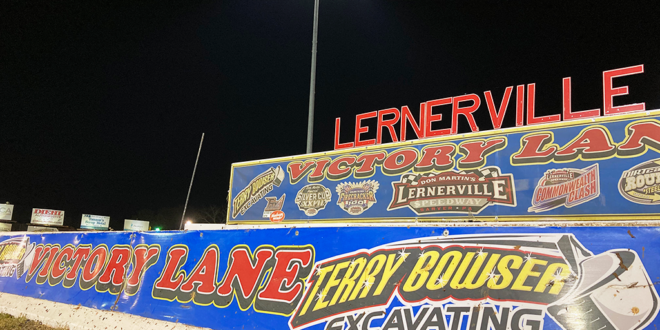 SARVER, PA – Oct. 17, 2020 – A record 332 cars total packed the Lernerville Speedway pit area Saturday night for the annual DIRTcar Roundup Steel City Stampede and put on some of the best racing the event has seen in its 12-year history, all for the first time live on DIRTVision presented by Drydene.

Among those in Victory Lane were two first-time winners in DIRTcar competition, receiving the coveted genuine steel belt buckle trophy as victors in their respective divisions.

410 Sprint Cars
He claimed his fourth Lernerville Speedway track championship just a few weeks ago. Saturday night was just one more reason to celebrate for the team from Apollo, PA, and their driver, AJ Flick, who scored his second career Stampede victory in the 25-lap event.

Put simply, there was no stopping the Fence by Maintenance Service #2. After winning his Heat Race on Friday night to get into the redraw on Saturday, Flick jumped out to the lead from the outside pole in the Feature and simply checked out, opening up a near five-second lead over second-place Carl Bowser before the race’s only caution flag was displayed on Lap 20.

The yellow may have erased his big lead, but it just didn’t matter. Flick gassed it up on the restart and pulled away again, leading the field back around to the checkered flag unchallenged for his first Stampede finale win since 2016.

“It’s a real slick track, which we haven’t been accustomed to much this year,” Flick said of his drive in Victory Lane. “So, I just tossed something at it. We tossed some stuff at it yesterday; I still don’t think we were that good, but we were at least good enough to keep it up front.”

Back-and-forth the two polesitters raced, swapping the lead several times over the course of the caution-filled affair. Zambotti worked the low line while Bish hung it out up top, and the two put on one thrilling show as the laps clicked off.

Unfortunately for the leaders, several cars further back in the field had some recurring issues keeping things rolling under green, forcing numerous yellow flag displays in the first half of the race. This put the Feature event at its maximum time limit with only 12 circuits complete, and the race was made official at the final caution. Bish was the leader at the time and was declared the winner.

This was Bish’s first-ever triumph in the event, and he met a very excited crew in Victory Lane to help celebrate.

“That was a lot of fun,” Bish said, almost out of breath as he climbed from his car. “I commend [Zambotti] for racing me clean. I accidentally got into him one time coming down the backstretch and I apologize that. But it was a lot of fun, he’s a tough competitor; he’s got a lot of laps here.”

In what was likely the most exciting finish of the night, Jared Miley stole his second career Stampede victory in the final corners with a swift move to the inside of Dave Hess Jr. to score the $3,000 victory.

Hess and Max Blair had been locked in the thick of a battle for the lead by the time Miley entered the picture. Hess led the first 11 laps before giving way to Blair’s hard charge from 11th, and soon Miley was headed for the podium.

Blair held the lead on a Lap 20 restart as Hess made a power move to the outside to take the lead back. Now with Hess back in control, Miley zeroed-in on his targets as he moved to the third spot behind them.

A final caution flag was displayed with 23 laps in the books, setting the field up for a green-white-checkered finish. Miley got a great run off the bottom of Turn 2 on the restart and challenged Hess for the top spot as Blair tried to make it three-wide out of Turn 4. But on the white-flag lap, it came down to a big move by Miley in Turn 4 as Hess slipped over the edge of the banking, opening the door for Miley to drive right on by and collect his first belt buckle since 2010.

“That was just one of them deals where the early restart hurt me, lost a couple of spots,” Miley said in Victory Lane. “I knew the car was pretty good, not perfect, but that last restart – Max [Blair] missed the bottom a bit down here and I got under him. That last corner, or last two corners, we were all side-by-side, so everybody was just kinda going for it, and we were just in the right place at the right time.”

Only a few days removed from the completion of DIRTcar OktoberFAST on the tracks of New York, and the Big-Blocks are still putting on great shows. This time, between father and son.

Rex King and his son Rex Jr. started the 25-lap Feature on the front row and combined for all 25 laps led. King jumped out to the early lead while King Jr. followed, eventually grabbing the lead down low on Lap 4.

King came back at him on the high side and swiped the lead back on Lap 9; King Jr. kept the low line rolling and took it back on Lap 12. Cooter kept his momentum up on the smooth, slick racing surface and held the lead until after a restart on Lap 21, where his father had it wound-up on the top side and skated on by for the lead and eventually the Feature win – his first belt buckle in event history.

“I noticed [about] 10 [laps or so] before the caution that I had a good run up on the top, and I thought, ‘that’s working pretty well, I better not show that off.’ So, I waited, and it worked out with four or five [laps] to go and I capitalized on it on the top,” King said of his decision to make the pass on the top late in the race.

For a man pulling triple-duty this weekend, Brian Ruhlman sure made his third career Stampede victory with the UMP Modifieds well worth watching.

Dan Davies jumped out to the early lead in the opening laps and held it through the halfway point while Ruhlman was making the pass for second on three-time race winner Jonathan Taylor. A caution flag was displayed on Lap 13, setting Ruhlman up for a shot at the lead on the restart.

Back up to the high side went Ruhlman as he got by Davies on the restart. Another caution flew not long after, presenting Davies with a chance to grab the lead back, which he did down low on Lap 17.

Only .016 was the gap between the two at the stripe as they neared the final lap. Ruhlman stepped on it over the last few circuits and opened up a small gap, just enough to sneak by for his second consecutive UMP Modified victory in the event.

“With the momentum and [the fact that Davies] was down there, I figured this car is so drivable that you can just kinda pedal around top there and not have to worry about over-driving,” Ruhlman said of his car in Victory Lane.