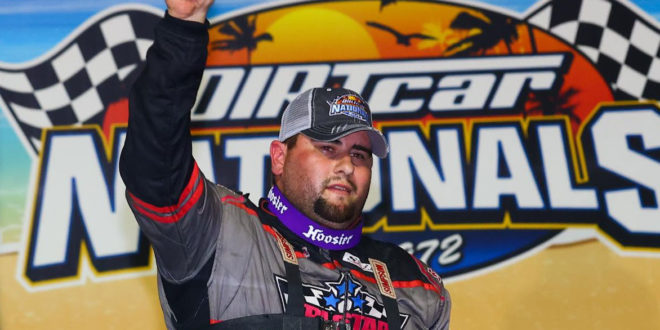 The Marshalltown, IA driver held off challenges from Devin Moran, Tim McCreadie, and Brandon Sheppard on the path to victory

Ryan Gustin came into DIRTcar Nationals with one mission— to win a race for his friend and sponsor Leon Ramirez.

The Marshalltown, IA driver accomplished that mission Tuesday at Volusia Speedway Park, holding off several challenges to grab the $7,000 payday and his first DIRTcar Nationals win.

Tears flowed from Gustin’s eyes as he spoke in Victory Lane, winning in honor of Ramirez, who passed away last Sunday.

“This one right here is for Leon Ramirez,” Gustin said. “He was a very good friend, a great sponsor, and this one’s for the whole Ramirez family. I wanted to win one really bad for them, and we did it. Hopefully, we can keep on doing it.”

Gustin charged through the field at the first green flag, driving from sixth to second in one lap. At that point, only Brandon Sheppard stood between him and the checkered flag.

A restart with 16 laps to go gave Gustin the opportunity he needed—setting up a battle for the top spot.

Gustin outran Sheppard and Tim McCreadie in the middle of an epic three-wide war, taking advantage through Turns 1 and 2 and thundering down the backstretch with the lead.

While a victory was close, Devin Moran hoped Gustin’s chances would slip away. The Dresden, OH driver used the bottom to try and pass him, but nothing stopped the Iowa campaigner from taking the checkered flag.

The emotional win also boosted Gustin’s confidence as his crew found something to build on.

“It feels really good,” Gustin said. “We’ve been working really hard; I think we stumbled upon some things that work really good. I just can’t thank everyone enough who’s behind this.”

Moran finished second, one night after a third-place run. After back-to-back podium finishes, he currently leads the chase for a “Big Gator” trophy. The defending DIRTcar Nationals Champion hoped Gustin would make a mistake but couldn’t get past him in the end.

“[Gustin] just did a good job,” Moran said. “I tried to get him to make a bigger mistake than what he did, but congratulations to them guys; I know it’s a big win for them.

“We’re just staying consistent; the car is just really, really good, and we just got to keep working on it. I can’t quite finish the corner, so there’s some things we need to work on.”

Tanner English crossed the line third, moving up eight spots from his eleventh starting position. The Benton, KY driver, stated the restarts were critical to his ascension through the field.

“The restarts helped out a bunch for me,” English said. “I knew I had a good car, but we just had to get close to them so I could pass them, and we just rolled around the bottom, and I didn’t see anyone else as low as I was.”

Ryan Gustin accomplished the mission he set out for himself at DIRTcar Nationals—giving himself a boost of confidence along the way. It’s a win he’ll never forget, celebrating on the Volusia stage with Leon Ramirez smiling down.

The World of Outlaws CASE Construction Equipment Late Model Series takes center stage for the rest of the week as the “Big Gator” quest continues. They’ll be joined on the card by the Super DIRTcar Series. For Tickets: CLICK HERE.