Evansville, IN — INTERESTING TITLE: There’s a logical reason why StormPay.com Clarksville ( Tenn. ) Speedway is hosting one of the most uniquely-named events on the UMP DIRTcar Racing calendar – this weekend’s fourth annual Tuckasee Toilet Bowl Classic.

Like a zany minor-league baseball promotion, the ‘Toilet Bowl Classic’ is designed to catch fans’ eyes and make them giggle.

“We came up with the name to get some attention and have some fun,” said Clarksville Speedway promoter William Scogin. “I wanted to do something that wasn’t the same old thing.”

Steadily becoming an early-season staple, the ‘Toilet Bowl Classic’ is set for this weekend (March 21-22) at the quarter-mile, semi-banked Clarksville oval. It was originally scheduled to be run on March 7-8 but was postponed by bad weather.

The Super Late Model portion of the show will span both days – time trials and heat races on Fri., March 21, and B-Mains and the feature on Sat., March 22 – while the $2,000-to-win Modified program will be run as a one-day program on Friday and the Pro Late Models will be in action on Saturday. An additional Modified event paying $1,000 to win has been added to Saturday’s schedule.

Scogin and the late Bill Nelson, a former UMP DIRTcar promoter and car owner who passed away on March 10, hatched the idea for the ‘Toilet Bowl Classic.’

“When I bought the racetrack, I said I was going to the ——-,” joked Scogin. “I guess that joke developed into the ‘Toilet Bowl’ race.”

Of course, the trademark of the event is the ‘trophy’ that the winner receives: a full-fledged toilet. This year Scogin has three toilets ready to present the victors of the Super Late Model, Modified and Pro Late Model features.

The Super Late Model drivers who have posed for Victory Lane photos with the ‘Toilet Bowl Classic’ hardware include Billy Moyer of Batesville , Ark. (2005), Tim Tungate of Campbellsville , Ky. (2006) and Ray Cook of Brasstown , N.C. (2007). They all chuckled a little bit when the toilet was brought out to them, but they undoubtedly never accepted a ‘trophy’ quite so memorable.

“When Ray Cook won last year, he said, ‘The money goes away, but the toilet never leaves,’” Scogin said with a smile.

What driver doesn’t want a toilet in their trophy case?

“When Shannon Babb won our (UMP DIRTcar) Summernationals show (in 2006), he asked me in Victory Lane , ‘Where’s the toilet at?’” remembered Scogin. “I thought that was pretty funny. I guess they all know about the toilet!”

DELUGE: The fifth annual ‘Bluegrass Bash’ – one of the biggest UMP DIRTcar open-wheel Modified events of the early-season – was postponed one week due to the heavy rain that fell this week on the already-saturated grounds of Western Kentucky Speedway in Nebo , Ky.

Originally scheduled for this Friday (March 21) and Saturday (March 22), the program will now take place on March 28-29.

The ‘Bluegrass Bash’ boasts an attractive $6,000 top prize from a total purse of over $27,000, assuring the participation of the top stars in UMP DIRTcar open-wheel Modified racing. Last year’s event drew a field of nearly 100 cars.

Erb, 36, finished second to defending World of Outlaws Late Model Series champion Steve Francis of Ashland , Ky. , in the 40-lap A-Main – by mere inches. Francis crossed the finish line with a right-rear flat tire as Erb made a last-ditch bid for the checkered flag on the inside.

The driver known as the ‘One Man Band,’ who plans to enter this weekend’s ‘Toilet Bowl Classic’ at Clarksville , followed up his close call with a third-place finish from the 14th starting spot in KLMS’s 40-lap A-Main on March 14. That race was won by six-time UMP DIRTcar Summernationals champion Billy Moyer, who leads all drivers in 2008 with four UMP DIRTcar-sanctioned feature wins, including his three scores during last month’s Alltel DIRTcar Nationals at Volusia Speedway Park in Barberville, Fla.

ONE MORE WEEK: This Friday night’s scheduled season opener at Attica ( Ohio ) Raceway Park has been postponed to Fri., March 28, putting off for one more week the introduction of UMP DIRTcar-sanctioned Late Model racing at the one-third-mile oval.

The 2008 season will mark the first season of UMP DIRTcar competition for the Late Models at Attica , which was covered by 14 inches of snow during a recent storm and saturated by more precipitation in recent days, forcing the postponement of the lidlifter.

COMING SOON: The countdown continues to the richest Super Late Model event ever contested in the state of Illinois – the inaugural ‘Illini 100’ on April 4-5 at the longtime UMP DIRTcar-sanctioned Farmer City Raceway.

A World of Outlaws Late Model Series race that is co-sanctioned by UMP DIRTcar, the two-day extravaganza at the quarter-mile fairgrounds oval will pay a whopping $20,000 to win from a total purse of nearly $100,000. The event will use UMP DIRTcar’s four-compound Hoosier Tire rule.

For more information on the ‘Illini 100,’ visit www.farmercityraceway.net or www.worldofoutlaws.com.

INFO: Log on to www.dirtcar.com for more information on UMP DIRTcar Racing. 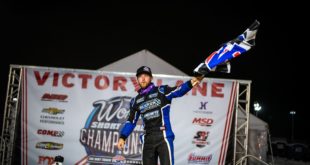 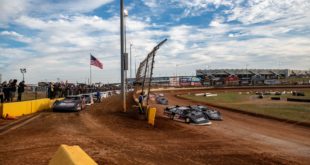 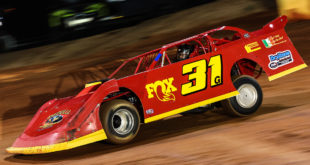