After a blown tire during heat action two nights earlier at Lawrenceburg (Ind.) Speedway set him down a road that cost him the Summer Nationals points lead, Shirley had everything go his way at the quarter-mile fairgrounds oval. He inherited the lead on two occasions from drivers who retired with mechanical trouble and was in front when rain arrived and forced officials to declare the race official with 26 of a scheduled 40 laps completed.

The race’s fourth starter, Shirley found himself in front of the field for the first time with his Ed Petroff-owned No. 3s when race-long pacesetter Don O’Neal of Martinsville, Ind., dropped out with mechanical woes on lap 21. Eric Smith of Bloomington, Ill., overtook Shirley to assume command on the lap-21 restart, but he paced only two circuits before also pulling off with mechanical trouble.

Smith’s departure left Shirley in the lead on lap 24. He was still there on lap 26 when rain intensified during a caution flag for Jeep VanWormer of Pinconning, Mich., prompting an early checkered flag and handing Shirley a $6,000 prize.

Four caution flags slowed the event, with the most serious incident for a lap-two rollover by Derek Chandler of Pontiac, Ill. He wasn’t injured.

VanWormer was the fastest qualifier among the 46 cars on hand, turning a lap of 13.712 seconds.

Heat winners were Smith, O’Neal, Matt Taylor of Springfield, Ill., Shirley and VanWormer. The twin C-Mains were topped by Brandon Sheppard of New Berlin, Ill., and Daren Friedman of Forrest, Ill., and Korte captured the B-Main.

The UMP DIRTcar Summer Nationals has a scheduled off day on Monday (June 30) before returning to action with Round 14 on Tuesday night (July 1) at Peoria (Ill.) Speedway. 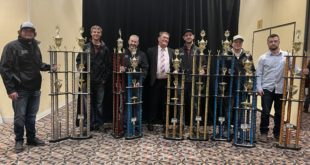 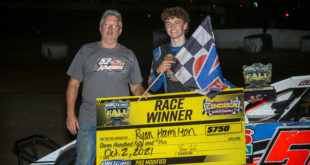 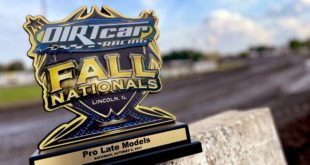