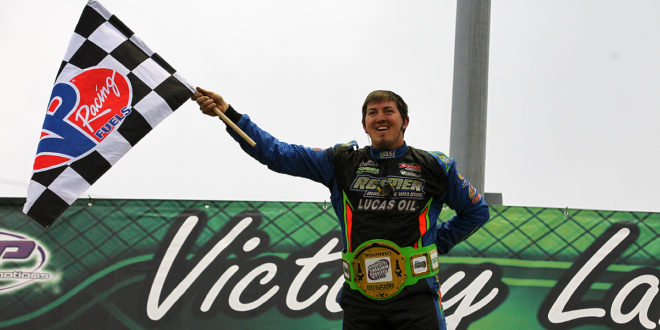 Thirty laps down, 30-to-go. A roomy two-second lead on the quarter-mile LaSalle Speedway. Brian Shirley appeared to be well on his way to a second career Thaw Brawl title.

Garrett Alberson, with an assist from Mother Nature, had other plans.

Alberson took to the high side on a restart after halfway and used a rain-dampened track surface to make the pass on Shirley, driving away in the home stretch to score $12,000 and the first green-gold Thaw Brawl title belt of his career Saturday night with the MARS Racing Series.

With wet weather overhead and the race lead in-hand past halfway, most drivers would be looking for an instant downpour to cut the race short and declare them the victor. But not Alberson – he wanted to go the full 60 laps.

“I was glad it ran the rest of the way. It gave me a chance to actually win the race, I feel,” he said.

Alberson, of Las Cruces, NM, now residing in Dubuque, IA, took the initial green from inside Row 2 and watched as Shirley, of Chatham, IL, jetted out to a two-plus-second lead in traffic; outside polesitter Tanner English, of Benton, KY, just ahead of him.

A caution flag on Lap 31 broke the leaders’ hectic chase through lapped traffic, giving the impending rain sprinkles a chance to fall. Which, they did – benefitting none more than Alberson as he lined up third for the ensuing restart.

The green flag dropped. Alberson got a great launch off Turn 4 and threw it way up the banking in Turns 1-2 as Shirley stuck to his guns down low. While he was unsure of whether the top would work, Alberson knew that he was all done waiting for someone else to make a mistake out front.

“I didn’t really know if the track was going to hold-up or be slimy or not. When we took off, I was on the outside row there and I hadn’t been to the top in a few laps, but I just said, ‘to heck with it, I’ve got to go for it right now,’” Alberson said.

With some great momentum on the top lane, Alberson blasted off Turn 2 and beat Shirley to Turn 3, moving down to protect the pass as he rounded Turns 3-4.

“It just kept sprinkling ever so slightly and seemed like it really helped my tire take back off. After that, the car just felt super balanced,” Alberson said.

The yellow came back out one lap later, but Alberson made the middle groove work to his advantage on the restart and proceeded to put some distance between he and his opponents, being careful not to overdrive.

“I still felt like I had some in the tank,” Alberson said. “I was just trying to take it easy a little bit on my tires there – we were a little bit softer than those guys were.”

Some smooth driving in lapped traffic as the race wound down helped him maintain the lead as he jetted across the finish line, fist in the air out the window, a first-time Thaw Brawl main event winner.

Shirley crossed the line in second, just 1.3 seconds shy of his second Thaw Brawl belt. Tanner English came across in third, matching his finish from Friday night. Though he was happy to know Alberson got a big win, even English himself was surprised to see Alberson’s speed on the moist track conditions.

“It was like he had rain tires on. As soon as that hit, he took off and left us there. We caught back up to him at the end, but he was gone,” English said.

The MARS Racing Series is back in action next Friday and Saturday night with two big-money shows on tap. The annual Farmer City 74 hits the Farmer City Raceway on Friday night, May 14, with $10,000 in-store for the winner. Fairbury Speedway then hosts the MARS DIRTcar Late Model stars Saturday night in the $15,000-to-win Spring Showcase.

Stay tuned to DIRTcar Racing’s social media channels and website for updates throughout the weekend.