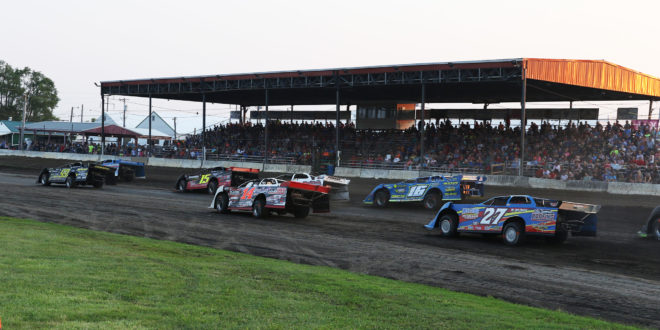 Twenty-six weeks of racing down, one final weekend to go. It’s time to crown national champions in the 26th annual DIRTcar Fall Nationals.

Lincoln Speedway will host the season-end spectacular for the second-straight year this Thu-Sat, Sept. 30-Oct. 2. Six DIRTcar divisions will take to the quarter-mile oval over three nights in the final weekend of the DIRTcar regular season.

The Stock Cars head to Charleston Speedway on Saturday night, joining the Factory Stocks in the track’s annual DIRTcar Street Stock Fall Nationals event, paying $2,000 to the Stock Car Feature winner and $150 to start the race.

It all starts with Thursday night’s practice session at Lincoln – don’t miss a moment of the action! Buy a ticket at the gate, camp out or stream Friday and Saturday night live on DIRTVision presented by Drydene.

One of Steinkoenig’s fifteen victories this year came at Lincoln on June 4 over Ryan Hamilton, who is also scheduled to compete this weekend. The only other Pro Modified race held at Lincoln this year was in the season opener on April 9 – the 2020 Fall Nationals makeup date. Kevin Crowder, of Argenta, IL, scored the win over Kyle Helmick, both of whom are projected to be part of the Pro Modified roster again this weekend.

FEELS LIKE THE FIRST TIME – Newly crowned UMP Modified track champion Ray Bollinger, of Kewanee, IL, comes into the weekend as a favorite with five Feature victories at the track already this year.

This is Bollinger’s first career track championship at Lincoln, winning the gold by 62 points over Brian Lynn. Of the 11 events, Bollinger drove his Nutrien Ag Solutions #77 to a top-10 finish in all but one.

This weekend serves as the eighth and final race on the schedule, and with his plentiful Pro Late Model experience at Lincoln this season, Little looks to end his 2021 campaign with a $3,000 check in his pocket as a Fall Nationals winner.

EIGHTEEN AND COUNTING – It’s been a season to remember for New Berlin, IL, driver Jose Parga, with 18 DIRTcar Pro Late Model victories since opening weekend in April – the most of all drivers in the nation. No other driver had more than nine.

Parga unofficially secured his first DIRTcar national championship by nearly 100 points over the rest of the field, largely credited to his dominance in weekly competition at Lincoln. Nine Pro Late Model Features were held at the venue this year – Parga won seven of them.

Nick Macklin has unofficially wrapped-up his first career DIRTcar Stock Car national points championship with eleven Feature wins on the season, including his latest at Jacksonville Speedway last Saturday. Runner-up Terry Reed Jr. scored a win at Macon Speedway the same night, while third-place Megan Erwin appeared to be on her way to victory at Kankakee County Speedway before overheating issues forced her to give up the lead and retire early.