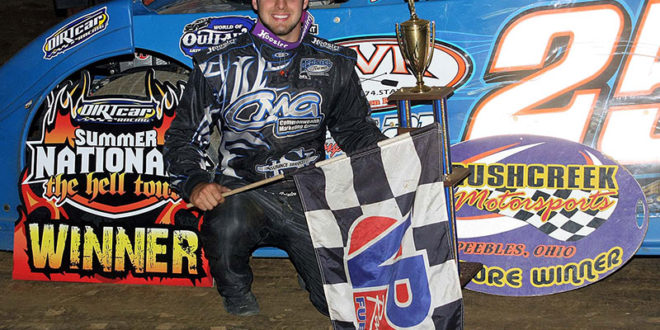 Zeigler, a 17-year-old from Chalk Hill, Pa., started the 40-lap feature event on the outside of pole-sitter Ryan Unzicker. Zeigler quickly shot around Unzicker for the top spot on the opening lap, as Unzicker fell back through the field, eventually settling for a eighth place finish.

Zeigler was never seriously challenged, as third-place starter R.J Conley worked his way to second but could never catch Zeigler to capture the lead. R.J Conley ran second for much of the race but fell to fourth after allowing his dad, Rod Conley, and championship-leader Shannon Babb to slip by him.

Rod Conley had a chance to overtake Zeigler following a late-race restart, but fell just short as the leader rocketed away from the field after a couple of laps. Rod Conley eventually finished a distant 3.298 seconds behind Zeigler, who became just the second Pennsylvania native driver to win in DIRTcar Summer Nationals action, joining Rick Eckert on that exclusive list.

Zeigler, who runs a family-owned Longhorn Chassis car, led from the drop of the green-flag to the checkers, easily capturing his first DIRTcar Summer Nationals victory in his first career start at Brushcreek Motorsports Complex.

Weve been trying so hard and working so hard at the shop just to get everything dialed in, said Zeigler, whose win will likely allow him to continue in DIRTcar Summer Nationals action on Friday night at Attica Raceway Park. We got this new Longhorn earlier this year and we struggled a little bit, but weve been really good overall with it. I think were finally getting to the point where we can really dial it in and get it how we like it.

The 2014 DIRTcar Summer Nationals championship standings took another substantial turn Thursday night. After closing to within 26-points of championship-leader Shannon Babb, Ryan Unzicker started from the pole-position and looked to carry over the momentum. He was joined at the front of the field by Brian Shirley, who started fourth and sat third in the points just 45-markers behind Babb.

Unfortunately for both Unzicker and Shirley, their cars were never in contention. Babb, on the other-hand, marched from his seventh starting position to pass both drivers, who finished eighth and seventh respectively, en route to a third place finish. Babb increased his points-lead back to 45-points over Unzicker with just two races to go.