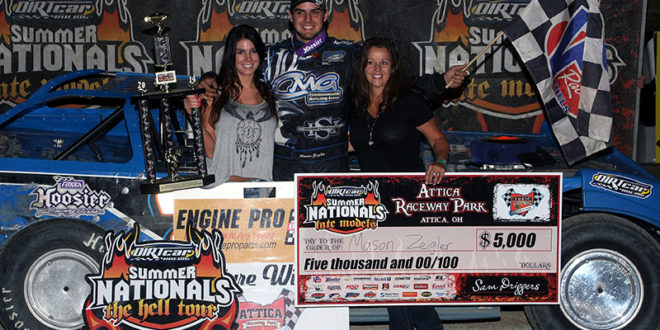 Zeigler once again started on row one, this time joining Duane Chamberlain, who captured the pole-position. Just like on Thursday night at Brushcreek Motorsports Complex, Zeigler shot around the pole-sitter to capture the lead on the opening lap of the 40-lap feature.

Zeigler proved his first start in DIRTcar Summer Nationals action wasnt a fluke as he easily controlled the lead by more than a straightaway for much of the race. Zeiglers only competition came from Devin Moran, who started sixth and is the son of Hall of Fame driver Donnie Moran. Moran took control of second place on lap 15 and quickly cut into the Zeiglers large lead, but faded in the closing stages as the leader continued his dominant performace.

Zeigler defeated Moran by more than 3.689 seconds, as he was never seriously challenged for the lead. Zeiglers performance mirrored that of his first career start on Thursday night, as the 21-year-old led every single lap en route to capturing the $5,000 checkered flag for the second night in-a-row at Attica Raceway Park.

Its taken us seven years to get to this point, said Zeigler, who is fresh off his first career DIRTcar Summer Nationals victory at Brushcreek Motorosports Complex on Thursday night. Were finally on the right path. Im just so tickled to death with our whole program right now.

Shannon Babb used a provisional to start the A-Main after suffering a flat tire in his heat race. The points-leader was forced to start in the 19 th position, nine spots behind Ryan Unzicker, who sat 45-points behind Babb for the championship lead. Babb recovered from the poor starting position, finishing in the seventh position, just one spot behind Unzicker. Babb continues to hold a firm grip on a 43-point lead heading into championship night at Oakshade Raceway.

Heading into the final race of the 2014 DIRTcar Summer Nationals season, the tour joins the DIRTcar Summit Racing Equipment Modified Nationals on championship night at Oakshade Raceway in Wauseon, Ohio on Saturday night.