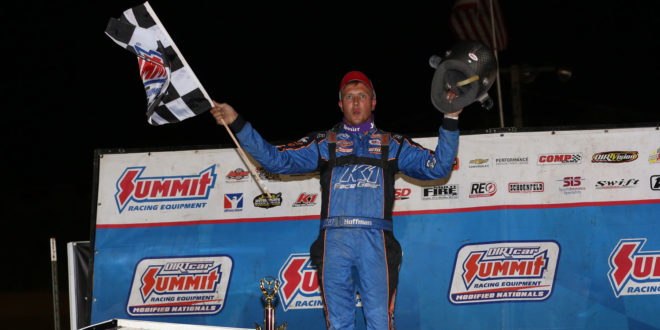 When a tough field of local powerhouses came knocking, Nick Hoffman answered the door with authority.

The four-time and defending DIRTcar Summit Racing Equipment Modified Nationals champion encountered the largest field of opponents he’s faced all season with 32 total Modified drivers in the Montpelier Motor Speedway pit area Wednesday night. Loaded with Montpelier’s fierce weekly field and several of the region’s top contenders, not once did Hoffman crack under the pressure.

Starting on the pole for the 25-lap Feature, Hoffman was beaten to the line on the first lap by local ringer Todd Sherman, who led the field around for the first four circuits before coughing up the lead to Hoffman on Lap 5.

“He was just sliding himself, trying to protect the bottom there,” said Hoffman, of “Once he got into that position, he was just vulnerable down the straightaways.”

“It really killed his exit momentum, and I was able to come down the hill and out-motor him down the back straightaway.”

Hoffman threw a slide job into Turn 3 and made it stick, taking the lead and bringing it all the way back home unchallenged for his 69th career Summit Modified Feature win, and 12th of the season. This gives him his fourth-straight season with a maxed-out win total, as only a driver’s best 12 finishes count toward the tour points standings.

The DIRTcar Summit Modifieds are back in action Thursday at Shadyhill Speedway in Medaryville, IN. If you can’t be at the track, watch all the action live on DIRTVision.