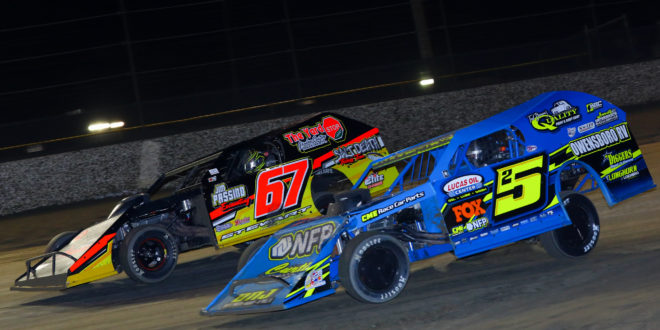 The national points season has concluded, but one of the biggest DIRTcar UMP Modified events on the calendar still remains.

The eighth annual Emil & Dale Reutimann Memorial kicks off in one week’s time – Thu-Sat, Nov. 18-20 – at Volusia Speedway Park. The nation’s best UMP Modified drivers will flock to the half-mile oval to take part in a night of practice on Thursday, followed by two nights of racing on Friday and Saturday.

Drivers will Hot Lap/Qualify to get Friday’s program started, then be divided into four separate Showdown Features. These Showdowns will take a number of transfers into Saturday’s Feature, while everyone else will file into a Last Chance Showdown. Once Last Chance Showdowns are complete on Saturday night, Feature cars will take to the track for the 50-lap, $7,000-to-win finale, live on DIRTVision.

The event is run in memory of Emil Reutimann Jr., 56, father to Dale, 17, and crew member Gordon Stone, 16. Each were killed after a collision with a drunk driver, just south of Zephyrhills, FL, on Highway 301 while traveling to a race at Golden Gate Speedway in 1973.

When the race was founded in their remembrance in 2014, the depth of its reach and prestige in the DIRTcar UMP Modified world was only a fraction of where it stands today. The growing list of local, regional and national talent that attends every year has surprised even third-generation racing veteran David Reutimann.

“I never dreamed it could get this big,” he said of the event’s growing prestige. “It started off just as a local deal.”

Reutimann won the second and third editions of the event in 2015 and 2016, when it was held at East Bay Raceway Park in Tampa, FL. The race moved to Bubba Raceway Park in Ocala for the 2017 and 2018 seasons, and has now made its home at Volusia – right where Reutimann had always hoped it would.

“Out of all the dirt tracks that I’ve been to – and I’ve raced a lot of dirt for a lot of years – Volusia’s by far my favorite place,” Reutimann, of Sherrills Ford, NC, said. “I always wanted it to end up at Volusia. That was kinda my vision.”

Volusia is also a favorite to defending Reutimann Memorial winner Tyler Nicely. The track was covered with new dirt for the 2021 season, which suited him well for his victorious run on the second night of competition in the 50th DIRTcar Nationals in February.

“[DIRTcar Nationals] racetrack was perfect,” Nicely said. “It got slick every night we ran on it, so hopefully it’s like that and we can stay on top.”

He debuted a new Longhorn by Loenbro chassis in the event last year and made a statement win, holding off Justin Allgaier and Nick Hoffman to capture his first farm tractor trophy.

This year is more of the same for the driver from Owensboro, KY. He’ll take another new Longhorn with him to Barberville, looking to duplicate the success he found earlier this year at DIRTcar Nationals.

“We learned, just like when we went to Speedweeks, we just had a handful of races in on that Longhorn,” Nicely said. “We ran on the podium every night except for two, I think. I feel like we’ve learned more about the racecar and I’ve gotten better with the racecar.”

Although he enters the event as the local favorite, he has yet to reach Victory Lane in the track’s marquee events. Armed with an Elite Chassis, built by Hoffman – the three-time and defending DIRTcar national champion – Stewart’s feeling more confident than ever this season.

“I’m excited to see what we got because I feel like we’ve made gains since the last time we went to Volusia,” Stewart, of Leesburg, FL, said. “[Hoffman’s] helped me a little more this year than in years past. Hopefully that pays off.”

With pre-entries on the list including Hoffman, Nicely, Chris Arnold, Kenny Wallace and Justin Haley, Stewart knows he’s going to need to bring his A-game if he wants to beat them.

$7,000, a unique custom trophy and a spot in the history books of one of Florida’s most prestigious dirt track races is at stake. Stewart will have home-track advantage and a legion of his local fanbase on his side as he chases what would be the biggest win of his career.

“Any big race at Volusia is awesome,” he said. “When you get national level guys, just to run well is exciting. But if we can win it, it would be huge for our program too.”