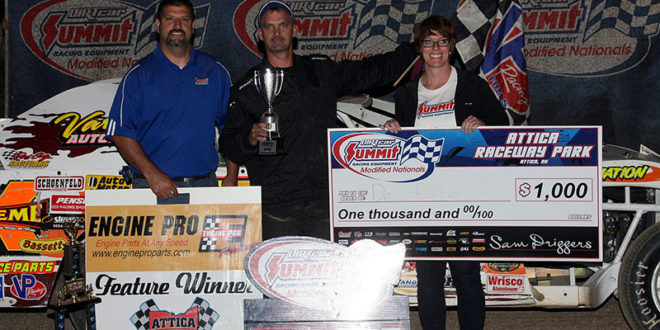 Baker started the 20-lap feature event from the outside of row one, as Jeff Babcock captured the pole-position. Babcock slipped out to an early lead as Baker came under fire from second-row starters Taylor Cook and Collin Thirlby.

Cook managed to grab the second position from Baker, who settled into third. After securing second, Cook reeled in Babcock, who led the opening three laps, with ease. Cook managed to get to the leaders inside as the two leaders battled side-by-side for the top spot.

Cook was credited as taking the lead on lap four, but had trouble clearing Babcock and building an advantage on second-place. The two leaders remained within a car-length of each other for much of the race, as Babcock could never build up enough momentum to work his way to Cooks outside.

Then with two-laps remaining, Babcock tried a daring go-for-broke move to the inside of the leader, as the two made contact, sending the leader spinning. Both drivers would be forced to start the final two laps from the rear of the field which gave third-place driver Dave Baker the lead. Baker held off Brad Wilson on the final restart, leading only two laps en route to claiming the $1,000 checkered flag at Attica Raceway Park.

Both points-leader Mike Harrison and Jacob Poel were absent from the feature event on Friday night. Heading into the final event at Oakshade Raceway, Harrison continues to cling to his slim six-point advantage over Poel as the two drivers duel it out on championship night.