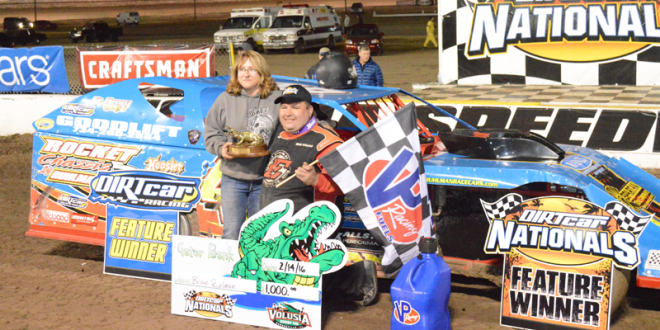 Joey Saldana led the field to the green flag in the 30-lap feature at Volusia Speedway Park but it was Kasey Kahne Racing’s Sweet who dominated much of the night. Sweet battled past Saldana for the lead on a lap 10 restart and even with a late race challenge from Lucas Wolfe, remained out front for the succeeding 20 laps.

“It’s unbelievable,” Sweet said. “The competition is so stiff that you have to put yourself in position each and every time you’re on the race track and it’s not easy, one mistake and you’re behind the eight ball. Tonight we did pretty much everything right, and luckily the dash draw helped us there because it was going to be a tough track to pass on.”

Sweet, who won the season opening series event at Volusia Speedway Park on Friday night, edged Greg Hodnett, who had been the picture of consistency all week, by just four points to win the ‘Big Gator.’ With Daryn Pittman’s 2015 Sprint Week championship, it is the second year in a row Kasey Kahne Racing with Mike Curb has claimed the ‘Big Gator’ trophy.

On the second night of Gator Qualifying for the DIRTcar UMP Modifieds, Brian Ruhlman, a Clarklake, Mich. native, muscled his way to the top spot on lap one and held off challenges from Jacob Hawkins and NASCAR star Austin Dillon to claim his first DIRTcar Nationals victory.

“I’ve always wanted a Gator, and we have been so close,” Ruhlman said. “I have to thank [my girlfriend] Veronica, it’s just her and I down here this weekend.

Nightly doubleheaders at Volusia run through Saturday, Feb. 20. On Monday night, the DIRTcar Late Models join the DIRTcar UMP Modifieds as the modifieds compete in for the Gator Championship.