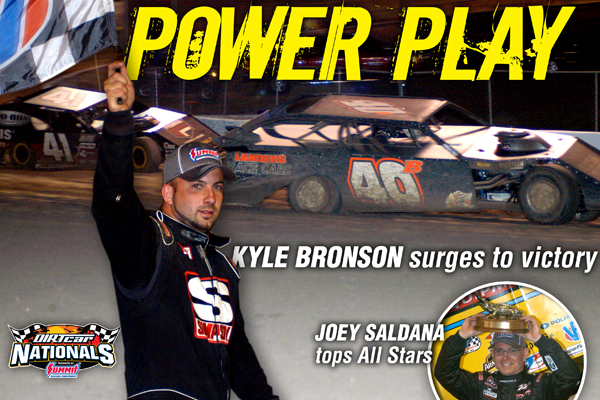 As the early leaders in the 20-lap DIRTcar UMP Modified feature found trouble, Bronson kept pushing to the front, eventually moving to the high side of the half-mile oval and edging NASCAR Nationwide driver Ty Dillon by 0.28 at the checkered flag.

“He went with a harder tire and I figured they would be better on the longer runs, but I think my softer tire worked better on the shorter run,” said Bronson, of Brandon, Fla. “Everybody acts like they’ve been given everything, but I’ve raced with them and they’re the best in the business, they should have been in NASCAR a long time ago.”

Earlier in the night, World of Outlaws STP Sprint Car Series regular Saldana showed off some newfound horsepower as he led the UNOH All Star Circuit of Champions main event from wire-to-wire, topping his good friend, McMahan, in the process. Saldana and his Motter Motorsports team came together quickly before last season and struggled early. Now a year under their belts, Saldana has been one of the fastest cars on the track this February.

“What a difference a year makes,” said Saldana, of Brownsburg, Ind. “I think when we changed cars at I-55 Raceway last season through the end of the season. I think it showed we learned a lot and we’re a way better team than we were at the start of last year. Actually the motor we ran was a motor from last year that had four nights on it and it ran well. It was a very good start to the season.”

Nightly doubleheaders at Volusia run Friday through Saturday, Feb. 22. Friday night is the season opener for the World of Outlaws STP Sprint Car Series, which will compete in conjunction with the DIRTcar UMP Modifieds.

For more information and updates on the UNOH DIRTcar Nationals Presented by Summit Racing Equipment, clickDIRTcarNationals.com or follow on Twitter at Twitter.com/DIRTcarNats.