With a buzz surrounding them since last week thanks to local media attention, Ty Dillon and Austin Dillon closed out the DIRTcar UMP Modified portion of the DIRTcar Nationals Volusia the best possible way possible as they each won a feature in addition to Ken Schrader.

Austin Dillon claimed the first hotly contested feature by holding off Bowyer and Peyton Taylor for the win. Dillon’s blistering pace allowed him to stretch his lead to nearly half a track before caution flags negated his work.

“I really feel like we had the team to beat this week,” said Dillon, of Welcome, N.C. “Things just got away from us earlier in the week after we blew an engine.”

Bowyer clinched the overall DIRTcar Nationals by UNOH championship on the strength of three wins over the eight nights that DIRTcar UMP Modifieds raced. Bowyer rattled off a third-place finish in the opener and followed that with two consecutive victories, missed a night due to obligations at Daytona International Speedway, finished second in ‘The Gator Championship’ before running second to Dillon in the final night of racing.

“I appreciate everyone coming out here to Volusia and supporting dirt racing,” said Bowyer, who will be one of 42 drivers to run the Daytona 500 on Sunday.

Finally, it was Ty Dillon’s turn to equal his brother’s performance from earlier in the night. Dillon, who on Monday night won ‘The Gator Championship’ at Volusia, grabbed the lead on Lap 4 when he motored past Richie Tosh. Dillon avoided a mid-race close call when he clipped a slowing car exiting the track in front of him, causing damage to the nose of his University of Northwestern Ohio Modified. Ty then hold off a furious onslaught from Michael Long before pulling away from the field with five circuits remaining to capture his second DIRTcar Nationals by UNOH win.

CLICK HERE FOR MORE PHOTOS FROM THE DIRTcar NATIONALS! 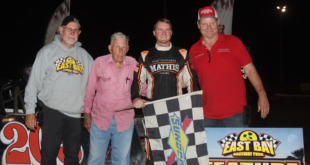