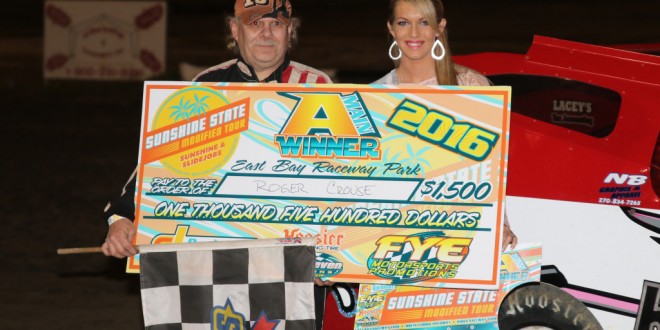 TAMPA, FL (January 31, 2016) – Round number three of the Sunshine State Modified Tour, presented by Dirt Nation and Hoosier Racing Tire, had 43 Modifieds signed in to battle at East Bay Raceway Park for the Sunday night showdown. Roger Crouse put his Beak Built Chassis in victory lane with a dominating performance in the 30 lap A-main.

Crouse and Trent Young of Crofton, KY sat on the front row of the 25 car main event. Crouse grabbed the early advantage as Young and Tait Davenport ran door to door for the second spot. Young retained the position, but a relentless Davenport stole the position while running along the cushion on lap nine.

A series of cautions then plagued the race as Crouse was forced to hold off Davenport and Young time after time on the restarts. Crouse did so successfully and with relative ease, as he chose to run in the moisture on the low side of the speedway each and every time.

As the race approached the closing stages, Mavrick Varnadore showed his muscle as he looked for his second podium finish of the tour. Both Young and Varnadore maneuvered past Davenport, who seemed to lose speed and fade away in the closing laps. Young and Varnadore put on a great show as they battled for the runner-up spot, but it was over a second-and-a-half behind Crouse’s #15.

Crouse took the checkered flag without pressure and extended his streak of winning at least one race at East Bay 30 of the last 31 years by leading all 30 laps. Varnadore came home second, while Young, Nick Hoffman, and Jason Gross rounded out the top five.

Davenport had to settle for sixth, the “Herminator” Kenny Wallace was seventh, and Ray Bollinger drove from 23rd to eighth as Preston Seratt wheeled his way from 17th to ninth. Last night’s $5,000 winner, Mike Van Genderen, rounded out the top 10.