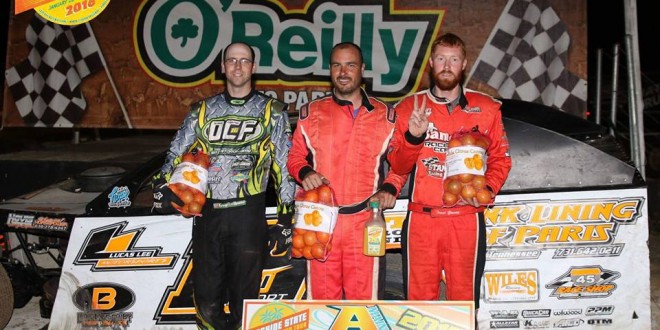 Davenport Doubles Down at Bubba

OCALA, FL (February 3, 2016) – The Sunshine State Modified Tour (SSMT) left East Bay Raceway Park and headed down the road to Bubba Raceway Park for round five on Wednesday night. The evening featured a 25-lap main event followed by the $1,000-to-win OctaneTrade.com King of the Sunshine bracket race. Both events were swept by Tait Davenport of Benton, Kentucky.

For the second night in a row, Peoria, Illinios’ Allen Weisser lined up on the front row with overall quick timer and heat race winner, Davenport, to his outside. Weisser jumped out to the lead as the initial green flag flew. Davenport and Trent Young battled for second as the top five raced around the bottom two grooves of the speedway.

Lap two proved to be disastrous for seven drivers as Kenny Wallace got loose in turn one and slid across the track. Nobody made contact with the No. 36 Toyota, but the field stacked up as a result and a big pile up ensued. Involved in the incident were Kenny Schrader, Jesse Hoskins and Todd Neiheiser, among others.

The race resumed and Weisser remained in the lead with Young and Davenport in tow. The top three drivers rode in that order until the caution flew with five laps to go. Under caution Weisser mysteriously retired his machine to the pit area, giving the lead to Young.

On the restart, Young and Davenport went door to door for the point. Young rode around the low side of the speedway, but Davenport charged by running the cushion upstairs. Once out front, Davenport opened up a comfortable lead over Young while Tyler Clem and Kevin Adams battled for fourth.

At the checkers it was Davenport taking the win as Young, Adams, Clem, and Josh Harris rounded out the top five.

After five rounds of the SSMT, Young leads Adams, Bollinger, Wallace, and Davenport in the points standings.

A quick intermission gave the drivers and crews a chance to fine tune their machines for the $1,000-to-win OctaneTrade.com King of the Sunshine bracket race. With two rounds in the books, the stage was set with the final four participants. The first and second place finishers in the A-main, Davenport and Young, faced off one more time and once again Davenport took the win and moved on to the final round. On the other side of the bracket, Kevin Adams went up against Billy Smith, who is the crew chief for Kenny Wallace and hopped in Jesse Hoskins’ No. 71. Smith was the Cinderella story of the bracket challenge as he charged through each round with his crate motor. His ride came to an end in the semis, however, as Adams charged on to the win.

That set up a final with Davenport and Adams. The two raced side by side on lap one, but as the white flag flew, Adams pushed off of turn four and that’s all Davenport needed to cash in once again and pick up another $1,000.