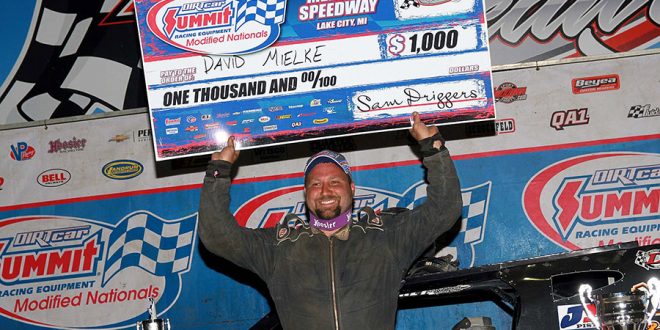 The series returns to action on Friday at Oakshade Speedway

LAKE CITY, Mich. – July 14, 2016 – David Mielke battled Nick Hoffman through the first half of the DIRTcar Summit Racing Equipment Modified Nationals feature at Merritt Speedway on Thursday night and came out on top for his first win of the season.

Hoffman led the field to the green flag as Mielke bided his time. Mielke finally got his chance, battling past Hoffman on the bottom side to take over the lead. As Hoffman faded, Mielke expanded his lead on the field.

Chad Bauer tried to run down Mielke but was not able to take the position. Mielke is the 10th different winner on the Summer Nationals tour this season. Bauer finished second with Aaron Morey in third and Hoffman in the fourth.

The DIRTcar Summit Racing Equipment Modified Nationals returns to action on Friday, July 15 for the first of a double-header at Oakshade Speedway in Wauseon, Ohio.