For more than a half-century, the DIRTcar Nationals and Daytona 500 have been intertwined at the hip.

Located just 22 miles away from each other, the commute from Daytona International Speedway’s beachside destination to Volusia Speedway Park’s gator pond, and vice versa, has been traveled thousands and thousands of times by race fans, media members, and, most notably, NASCAR drivers.

Several of the asphalt stars have made the step from blacktop to dirt – such as Kyle Larson, Christopher Bell, Kasey Kahne, Kenny Wallace, Ken Schrader, Matt Crafton and Justin Allgaier. However, none of them accomplished what Austin Dillon was able to do on Feb. 16, 2014.

A young 23-year-old kid at the time, Dillon had already proven himself as a Modified star and risen through the pavement ranks with a NASCAR Truck Series championship in 2011 and NASCAR Xfinity Series title in 2013. But at the time, he was a NASCAR Cup Series rookie and had the honor of piloting the iconic #3, made famous by Dale Earnhardt Sr.

It all came to a head when Dillon took the #3 for a trip around Daytona at 196.019mph on that Sunday afternoon. It was good enough to secure him the pole position of the Daytona 500, the most prestigious race in all of NASCAR.

So, you just won the Daytona 500 pole. What do you want to do? Race again, of course.

Dillon hurried through a satellite media conference, which nearly kept him from the track due to connection issues slowing the process. He begged his grandfather, Richard Childress, for a helicopter ride to Volusia, but grandpa denied it. 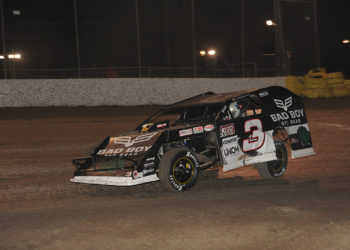 It would have to be the fastest 28-minute street drive of his life.

You see, Dillon had won six little gators over the prior years at DIRTcar Nationals, but for the last two nights in 2014, his younger brother Ty Dillon had stolen the spotlight. On that Sunday night, Austin was determined to break that streak.

He made it just in time for Hot Laps, then won his Heat Race, and started third in the main event. He quickly made it to the front and drove away with a dominant victory. It was like he was out for a Sunday drive at Daytona as he muscled his DIRTcar UMP Modified around the half-mile.

“All those guys are just regular guys, it’s where I grew up racing,” Dillon told Sporting News. “I go and talk to those drivers that are at Volusia and kind of challenge them and ask them what tires they are going with, what they think of the track. They’re all good at what they do.”

As he soaked in Victory Lane on the front stretch in front of a 7,000+ crowd, Dillon enjoyed the celebration, took some photos, and interacted with a few media members.

“I wasn’t surprised when he came,” Kenny Wallace told Sporting News. “This dirt racing is therapy for NASCAR drivers at times. Instead of sitting in your motorhome all tensed up, it keeps him calm.”

It was one of the greatest days of his life, and still holds a special memory that he’ll never forget.

Don’t miss that next iconic moment at the 50th DIRTcar Nationals, taking place over the next week and a half at Barberville’s Volusia Speedway Park (Feb. 2-13).

Fans can BUY TICKETS HERE or watch online at DIRTVision.com.