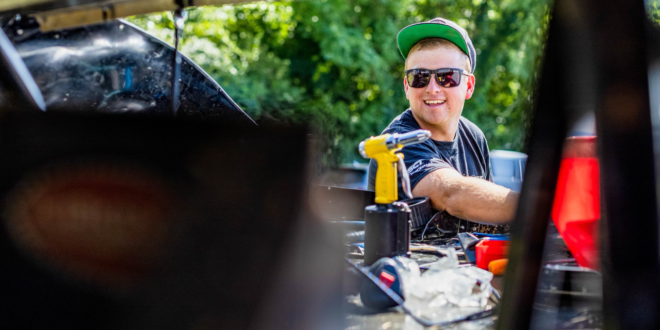 One of the fastest rising talents in DIRTcar UMP Modified racing will get his first shot at one of the most coveted trophies during Volusia Speedway Park’s Emil & Dale Reutimann Memorial, Nov. 18-19.

While Arpin has had much success at Volusia in his career, most notably hoisting a 2007 DIRTcar Nationals trophy as UMP Modified division champion, Dotson has yet to turn a single competitive lap around the famed half-mile oval. However, it’s been on his radar for quite some time.

“I’ve heard a lot about it,” Dotson said. “I’ve watched a lot of videos from there, so I’m excited to go and run and get some laps in before we go there for Speedweeks.”

The Reutimann name represents one of American motorsports’ most iconic families. Buzzie, the two-time Super DIRT Week winner and 2022 Volusia track champion, and son David, the NASCAR veteran and Beak Built Chassis founder, carry the torch for the family into the annual memorial race that honors relatives Dale and Emil, who were killed several years ago in a traffic accident.

It’ll be Dotson’s first venture southward to race at Volusia, but he has already been brought up to speed on the history of the track and the family that races there.

“That family name is super valued, so it would be cool to win the memorial race,” Dotson said. “It’s a legendary track for racing Late Models and Modifieds, so it’d be super cool to win.”

Though it’s nearly become commonplace in Dirt Late Model racing, chassis brands hand-picking a driver to fill the seat of their self-fielded team is a phenomenon rarely seen in the UMP Modified world. Dotson has been stout in his first venture with the team, becoming one of few drivers to defeat four-time DIRTcar national champion Nick Hoffman this season in a wild finish at Port Royal Speedway.

Most recently, Dotson won big at Atomic Speedway, pocketing a $15,000 check and his third Renegades of Dirt Modified Tour victory of the season and second in two days.

At such a young age, Dotson has already beaten some of the sport’s biggest names. So what’s been the secret to his success?

“Mainly, it’s the team and the people I work with,” Dotson said. “The guys at the shop that put in the work – they’re super smart. Whenever I feel I need something, they can put it to the ground for me.”

He and the crew have been working from the Longhorn Chassis headquarters in China Grove, NC, where customer cars are fabricated and the team car is maintained. Though it’s well-kept equipment, Dotson is still relatively new to it and the UMP-style of Modified in general.

Dotson was a former full-timer in the Dirt Modified ranks around his native California, and never shied away from traveling, collecting several high-profile wins at tracks across the western half of the country. Since debuting in a UMP Modified last fall, he’s ascended to one of the top contenders in the division, to which he credits his big opportunity with the Longhorn team.

“We get to go test, so all the bugs that I need to work out as a driver, I get to spend time at the track figuring out,” Dotson said. “Steve [Arpin] raced a lot of UMP, so he helps me with a lot of that stuff.”

With Arpin, a multi-time Modified champion and Feature winner at tracks across the nation, and help from Longhorn’s lead engineer Kevin Rumley, the trio have formed a combination that threatens for the win in nearly every race they enter.

“It’s nice to have somebody that can watch and kinda nit-pick me and make me better whenever I make mistakes in the cockpit,” Dotson said. “That’ll help my future, for sure.”

“I get to work a lot with Kevin Rumley. Anything I need, if I need to ask a question or whatever, he helps me.”

Dotson made it to Victory Lane two weeks ago at The Dirt Track at Charlotte, collecting an All-Star Invitational win in the World Short Track Championship and later going on to a close runner-up in the Saturday finale. Though he was disappointed with the finish, he’s since turned his attention to his next big opportunity – the Reutimann Memorial.

Being in the driver’s seat of any well-backed motorsports team comes with solid expectations, but Dotson’s handled the pressure thus far. It’s an opportunity he takes great pride in fulfilling.

“It’s super awesome,” Dotson said. “It’s what I’ve always wanted to do since I was a kid. I [also] get to be a little closer to the Late Model world. Hopefully, one day, I’ll be able to get a shot in one of them and do that full-time.”

Catch Dotson and the Longhorn team compete in the ninth annual Emil & Dale Reutimann Memorial, Friday-Saturday, Nov. 18-19, at Volusia Speedway Park. Tickets will be on sale at the gate on race day.

If you can’t be at the track, watch every lap live on DIRTVision.