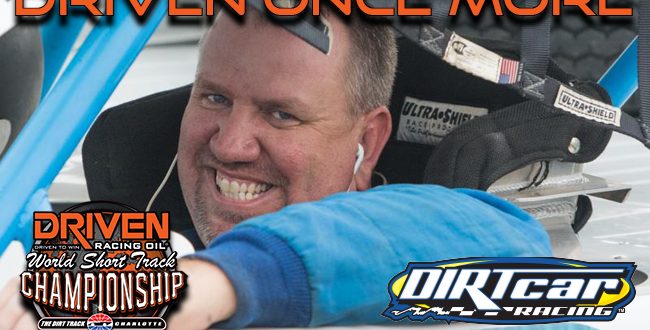 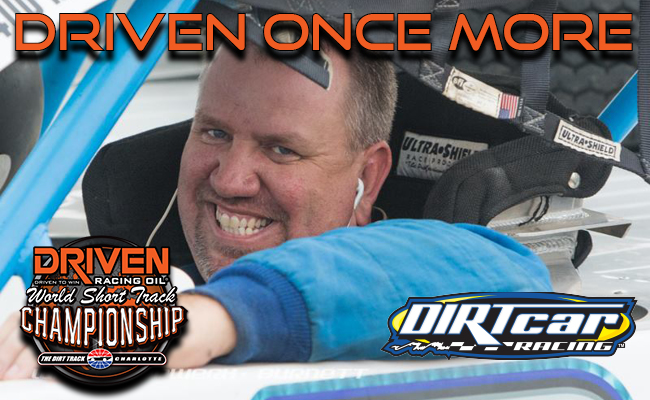 CONCORD, NC – October 18, 2018 – The Driven Racing Oil World Short Track Championship at The Dirt Track at Charlotte is almost here. With over 300 cars expected across nine different divisions of DIRTcar racing, it’s sure to be a great show again in the event’s third year.

Three-hundred-fifty cars in one pit area is a lot for one track to hold. But next year, the pits will see one less competitor in particular; a first-timer at Charlotte this year who’s checking the last item off his racing bucket list before he hangs up his helmet for good.

Mike “Juan Pablo” Reynolds is a former Street Stock and current DIRTcar UMP Modified driver from Clements, Maryland. He calls Virginia Motor Speedway his home for weekly racing, making the near two-hour trip every Saturday night. Since his DIRTcar UMP debut in 2014, Mike has also won races at the Potomac Speedway, Dixieland Speedway and Roaring Knob Motorsports Complex over the course of his eight-year career. But despite the success and competitive fulfillment he’s found as a driver, Mike was not always known amongst his family and friends as the man behind the wheel.

Jeff Reynolds, Mike’s brother, used to race a 4-cylinder around the local dirt tracks of Maryland in the 1990s. Mike was always at the track watching his brother with their friends and pitching in to help with the car. They all helped Jeff to move up through the ranks of Street Stocks and Super Late Models, until Jeff retired as a driver before the new millennium and Mike became a crew member, doing body work, for local Late Model driver David Williams.

Mike crewed for Williams for two years before starting up his own operation in the Street Stock division. He soon dug into the local scene at the Winchester and Hagerstown Speedways in 2010, but said he didn’t find the excitement he anticipated in it.

“I finished pretty high in the points every year,” Mike said. “But it just wasn’t my niche.”

He raced only four years with the Street Stocks before finding an opportunity to buy a UMP Modified late in the 2014 season.

“I really took to the Modifieds a whole lot better than I did the Street Stocks,” Mike said.

And took to them he did. In his very first race at Potomac, Mike showed his raw talent and found sparks of success in the early going, qualifying second and running in the top three for most of the feature event before falling victim to mechanical issues late in the race.

This initial success would carry through his rookie year (2015), as Mike would go on to finish fifth in points at Virginia Motor Speedway and third in points at Potomac Speedway, winning Rookie of the Year honors at both tracks.

In that year, Mike earned his very first DIRTcar UMP win at the Roaring Knob Motorsports Complex in Pennsylvania in dramatic fashion; breaking a drive shaft in hot laps, starting scratch in the feature and going zero-to-hero to pick up the win on the Fourth of July. A very memorable night for he and his whole team.

Over the course of the next three seasons, Mike collected a total of 10 wins in DIRTcar UMP Modified competition, including three at Potomac, five at Virginia and even a special event victory in North Carolina at the Dixieland Speedway.

Mike has also done a bit of tour racing with the Mid-Atlantic Modified Series, venturing out in 2017 to chase that title, where he finished fourth in points over roughly 25 races.

Mike said he credits a lot of his success to the help of brother Jeff, who, since his retirement, has been Mike’s main financial backer and crew chief. Jeff owns his own local repair shop, St. Mary’s Automotive, in Callaway, Maryland, and builds Mike’s engines. He has also been a longtime sponsor of nephew Matt Quade, whom Mike has enjoyed racing with in recent years.

“The main thing that keeps me wanting to do it is because me and my brother have a special relationship,” Mike said. “It’s just good to hang out with my brother and do it together as a family.”

But now, he’ll hang it up for good on October 27. The Driven Racing Oil World Short Track Championship at the Dirt Track at Charlotte will be Mike’s final laps as a driver.

He and his wife Kim have three children – Lilly, Davey and Eddie. And like most racecar drivers with growing children, safety and family soon takes priority over the sport they love.

“I’m happy when I’m [at the racetrack],” Mike said. “But honestly, over the last three or four years, I’ve got three or four kids who all play travel sports and are growing up. So it’s just a whole lot harder for me to do it now.”

It’s not a rarity in the slightest bit to see drivers at any level step away to make time for their personal lives. But now that it’s his time, Mike’s done a bit of reflecting on his career in motorsports as a whole.

Roughly 25 tracks over an eight-year career has been all Mike and his team could handle. But for right now, Reynolds Racing still has one track left to tame. They’ve never been to Charlotte to race, but Mike said he’s eager to make the trip and tear it up one last time.

“I definitely want to make the field. If I make the field, that’s a plus,” Mike said. “If I can finish 10th or better, that’s even better. But my main goal is to go down there and try to qualify for the race.”

When it’s all said and done, Mike would love nothing more than to be remembered as a great competitor by those he shared the track with.

“Pretty much, I’ve just raced everybody the way they raced me,” Mike said. “I feel like I’ve always been a clean driver and I’ve always showed respect to everybody.”

As long as his family is with him, Mike will be content looking back on his career. Once a fierce competitor, always a hero to his friends and family at the track.