TAMPA, FL……1/31/10……Rodney Wing of Meridian, Mississippi broke the string of no repeat winners in the 11th Annual Open Wheel Modified Winternationals Championship race, that was run as a make-up race on Sunday afternoon after the $5,000-to-win 75-lap finale originally set for Saturday night was rained out at East Bay Raceway Park in Tampa, Florida.

This opening act of East Bay’s 34th Anniversary season of their showcase month of Winternational events will be hard to top, as 63 different Open Wheel Modifieds showed four different winners in preliminary nights before Wing, the defending 09 champion repeated.

After leading from the pole for 66 laps, before being passed by outside running Jared Landers, Wing revealed, “There was only one place on the race track where I was better than he was and that was in turn three, so I got my chance on lap 72 and I made a dive for the inside and pulled ahead to lead the last three laps.”

` Showing a lot of excitement in victory lane, Wing continued, “Landers is a class act and I could run with him all day long! I want to especially thank my car owner Jeff Mathews and his crew for supplying me his back-up car. Robert Delgado built us great engines for this Shaw chassis. I promise, I’ll be back to defend my title next year. Can’t wait to get home to tell my family all about it.

The front of the field for the 75 laps showed Wing and Stanley Donahoo in the front row, with Rick Aukland and Kevin Weaver in row two and Jeff Mathews inside Mike Potosky in row three. With Wing leading, there was only one caution on lap 11 for John McCaul who spun inside turn four, before a lap 38 yellow for Devin Dixon sitting in turn two which turned into the mandatory fuel stop.

The drivers had an opportunity to get out of their cars for tearoffs, water and add fuel to their cars while checking out the rubber situation on their right rear tires. The winner determined he had about another 35 laps of rubber left, if he drove a conservative race to the end and didn’t abuse his tires.

Meanwhile 13th starting Jared Landers was up to eighth at the fuel stop. He said after the race, “I figured if I had new rubber, I could run it extra hard. I just can’t run a’ follow the leader race’ and I’d feel guilty if I didn’t get tires. I was doing alright and picking up spots on the outside after the break, and after I got in the lead, I made a mistake and kind of took it easy.” His Shaw by Landers chassis performed flawlessly with a Mullins engine under the hood. It carried sponsorship by Mark Martin Ford/Chevy, TSM Shock package and DV Products. His crew at East Bay was headed by Mike and Matt Cooper.

Rick Aukland, who described his right rear tire as looking like an inner tube , told the crowd that, “Jared (Landers) woke us up. Obviously there’s another lane out there, and he showed us all something. If your car is working well it’s all good in a 75-lapper, but if it’s not, it can be a handful. We were tight in hot laps, but OK for the race.”

Aukland capitalized on the battle for the lead and at the last minute slipped into second place at the checkered flag with his Lightning chassis with a “Big” Rick Twarg powerplant under the hood. Sponsors on his NO. 2A included Quick Time Performance Parts, Sweeney Services and Brandon Rental.

Kevin Weaver started fourth and finished fourth, while Dave Hess, Jr. started seventh and was as high as fourth, but settled for fifth. Rounding out the top ten it was Don O’Neal, Stormy Scott, Shane Sabraski, Brady Short and Dale Mathison. 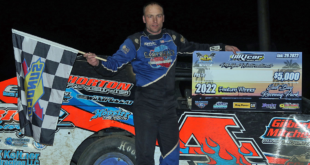 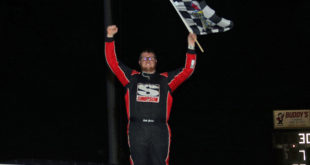