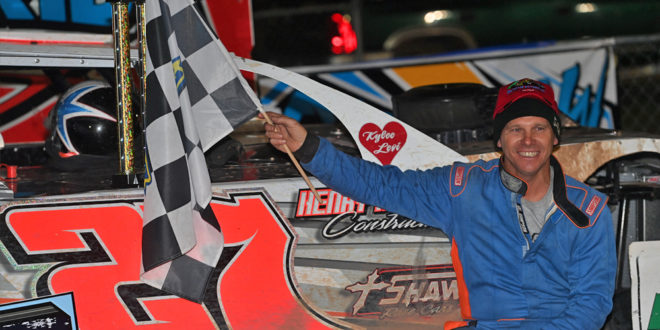 Just five trips around the North Florida Speedway stood between Jason Garver and his first career DIRTcar UMP Modified Winternationals Feature win. All he had to do was make the move on race-long leader Lucas Lee.

The local hero from Starke, FL, was running a several car-length distance behind Lee Friday night when the yellow flag was displayed for debris on the track. This put Garver on the inside of the second row for the ensuing restart, just inches off Lee’s rear bumper.

“Under that caution, I thought, ‘man, this is my only chance, I can’t let him get away,’” he said.

Garver got a tremendous restart and chased Lee around the three-eighths mile for only a lap before getting the run he was looking for as they exited Turn 2. Lee, of Paris, TN, won the drag race into Turn 3 and held the middle groove while Garver dug down low.

“I got a good restart on him,” Garver said. “I was probably about a half-car on him at the flag stand, so I knew for sure that was my chance. I just got some good bite right there and was able to get alongside of him.”

When Lee slipped up in Turn 2 on the very next lap, Garver was right there and ran through the open door with a big blast on corner exit. He beat Lee to Turn 3 this time and made him pay with a big slide job as they raced through Turn 4. Garver clicked off his first lap led of the race and brought it home three circuits later for his first trip to Victory Lane in a UMP Modified.

“It means a lot to me,” Garver said. “I’ve raced twenty-something years; it means a lot. This is pretty big. I can’t really put it into words.”

Before the yellow flag was thrown, Lee had been on a mission, putting his dominance on display by lapping all the way up to sixth position while leading every lap to that point. Needless to say, he was not happy to hear “yellow, yellow, yellow” over his one-way radio with only five laps to the finish.

“I didn’t really want to see it,” Lee said. “But, it happened, and we came home second.”

Before it was thrown, however, Garver had almost given up.

“I was glad to see the caution,” he said. “Lee had the race before then; I didn’t feel like we were going to do anything.

“We got a really good restart, he and I raced side-by-side for a lap or two, really good racing. We were able to pull it off, and it meant a lot to us.”

Indeed, it had meant a lot to his friends, family in attendance and especially his crew. A gold trophy, a $1,000 billboard check and a large group of smiling faces awaited him as he cleared the scales and headed toward Victory Lane, feelings of past struggles now exorcized as he jubilantly climbed from his Shaw Race Car.

“We’ve been close to winning some of these here at North Florida the last couple years, but the cards just didn’t play out. Tonight, lady luck was with us,” Garver said.

Truth be told, this was no easy victory against some rookie competition. Lee was coming off a week of racing in Tampa at East Bay Raceway Park, where he bested a 45-plus car field for the win on Thursday night. He’s also no stranger to the North Florida Speedway, and was running his race in his preferred groove throughout the event.

“I felt like I was actually better right in the middle-ish. But, my [signalman] moved me down, and [Garver] was better,” Lee said. “I think the racetrack was actually pretty good. Best I’ve ever seen it here.”

Nicely was the only driver of the group who managed a top-five; McKinney placed sixth while Hoffman dropped out in the final laps after running fifth. Weisser dropped out as well earlier in the race, leaving him with a 16th-place result.