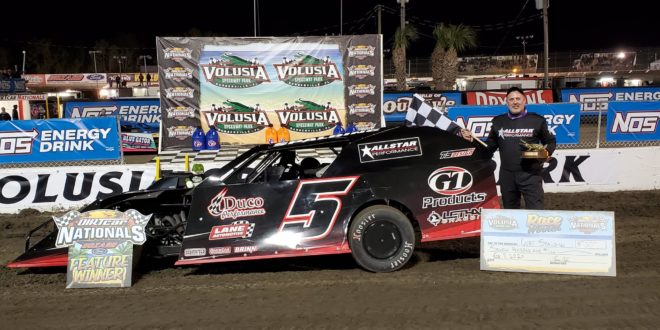 For the second year in a row, new winners emerge on Night of Features in the DIRTcar UMP Modifieds

The first of four Features was comprised of the top 20 in the current points standings coming into the night. With an inversion of 10, that placed Curt Spalding and David Stremme on the front row. Spalding jumped out to the early race lead with Stremme in tow. While the two front row starters battled, another war was waging behind them between Jason Hughes and Kyle Strickler.

With five laps to go, Strickler managed to get up to third to battle with Stremme, but by then Spalding was long gone, and the 48-year-old from Watervliet, MI in his #5 Lane Automotive / Lethal Chassis entry went on to win his first career DIRTcar Nationals Feature. Stremme was second as Strickler, Hughes and four-time defending DIRTcar Nationals Champion and current points leader Nick Hoffman completed the top five. Kenny Wallace finished sixth over Justin Allgaier, who started 14th, while Tyler Nicely from 17th, Ryan Cripe and Mike McKinney were the top 10.

The second Feature showcased the drivers in points positions 41-60. Christian Thomas and NASCAR Gander R.V. & Outdoors Truck Series competitor Sheldon Creed led the field to the green flag. Thomas paced the field in the opening laps with Creed trailing. Austin Holcombe joined the battle, but that was short-lived as he spun on lap six to bring out the caution. On the restart, Thomas pulled away, but this time Lucas Lee worked his way up to second trying to mount a challenge at the race leader.

Thomas wasn’t to be denied though as the 24-year-old from Wake Forest, NC in his #7 Wakefield Automotive / Elite Chassis ride led all 15 laps to score his first career DIRTcar Nationals Feature win. Lee settled for second as Gary Bentley charged from starting 14th to finish on the podium in third, Steve Stevenson and Michael Tarlton, from 11th, were the top five. Stephen Pedulla was sixth over Brenden Rassel, and Scott Fritz from 12th, Tony Anderson from 16th and Holcombe finished off the top 10.

In the third Feature of the night, for drivers 61st in points on back, Larry Mott and Percy Gendreau started on the front row of their main event, and before a lap was completed a massive pileup occurred in turns one and two. Everyone was able to drive away and continue. On the restart, Gendreau took the race lead with Bryce Nichols in tow. As the two drivers battled, former NASCAR Cup Series driver David Reutimann, who started deep in the field in 15th and only competing in his second night this week, charged his way towards the front, and a three-way battle ensued.

Nichols took the lead away from Gendreau on lap seven only to lose it three laps later, with five to go, to Reutimann, who would keep his #00 Blue Gator Tiki Bar & Restaurant / Beak-Built Chassis ride out front en route to his first-ever Feature win in the DIRTcar Nationals. Nichols settled for second, with Jesse Rupe, Robert Poole from 16th and Jerry Foster completing the top five. Zac Oedewaldt was sixth after starting 11th, while John Baker, Gendreau, Eric Hill, who started 17th, and Ryan Fowler completed the top 10.

The final Feature of the night was for the drivers currently positioned in 21-40th in DIRTcar Nationals points. 2019 NASCAR Whelen All-American Series Ohio State Champion Todd Sherman and Spencer Hughes started on the front row. Before a lap was completed, a massive pileup ensued in turn four. Just like in the previous feature, everyone was able to pull away. On the restart, Hughes beat Sherman to the first corner to grab the lead. Jason Beaulieu, who started sixth, charged his way up to third. After getting to second, he set his sights on Hughes. As the halfway point was reached, Beaulieu drove by Hughes to take the race lead.

From there, the 50-year-old who has travel to the DIRTcar Nationals 3,475 miles, one-way, from Campbell River, British Columbia would reach a milestone after coming to Volusia since 2011 and finally garnered that coveted first Gator Trophy aboard his #90 Coast Island Marine / Lethal Chassis ride. Hughes hung on for second over Ray Bollinger as three-time and defending NASCAR Gander R.V. & Outdoors Truck Series Champion Matt Crafton and 15-year-old Hunt Gossum, who started 13th, were the top five. Travis Dickson finished sixth, while Mike Mullen, Terry Phillips, Johnny Broking from 14th and Ryan Ayers, who started 17th, were the final top 10 of the night.

The World of Outlaws NOS Energy Drink Sprint Car Series continue with Sprint Week for the rest of the weekend as the Greatest Show on Dirt kicks off its 42nd year with the second of three total shows of the new season as part of the DIRTcar Nationals.