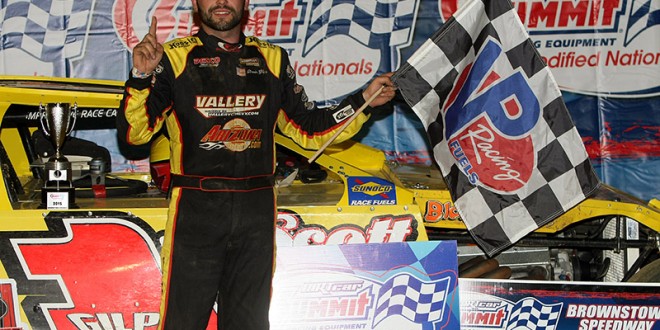 Gilpin started third and drove to the lead on lap 3, going to the inside of polesitter Joe Godsey on a restart. He led the rest of the way while the battle behind him was intense. Tyler Nicely wound up second with Bradley Sterrett, Godsey and Chad Combs rounding out the top five.

“This racecar was just awesome tonight, it’s a really good night,” said Gilpin, of Columbus, Ind., who also finished sixth in the DIRTcar Summer Nationals Late Model feature. “I want to thank Summit for everything they do for the Modifieds. To be able to race 30 nights with the modified Summit deal is just awesome. When I was a youngster I always said I wished they did that. Now that I’m older and they’re doing it I’m like, ‘Man, this is serious!'”

There were 35 UMP Modifieds entered in the event. Nicely’s runner-up finish was enough to move him to the top of the DIRTcar Summit Racing Equipment Modified Nationals championship standings, 21 points ahead of Josh Harris.