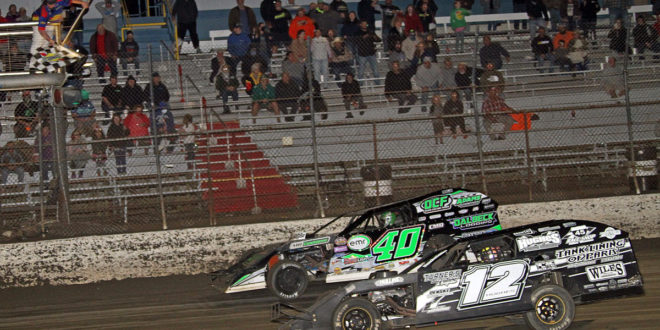 With just two laps to go, it appeared Kevin Adams was setting up for a high-flying pass on Jason Hughes for the win. Then, the yellow flag came out.

“I had him coming for the white, and then the yellow came out. I’ve got knuckle marks on my roof because I was so mad that it came out,” Adams said.

A green-white-checkered finish was now all that stood between Adams, of Cameron, WI, and a DIRTcar UMP Modified Winternationals finale victory at East Bay Raceway Park. A great start for Hughes set Adams back a little, but he made the most out of the high line, powering around the outside of Hughes and just nipping him at the stripe by .037 seconds to win his second consecutive Winternationals finale.

“I knew it was gonna be close,” Adams said. “Any racer that’s ever had a photo finish, you kinda just get his peripheral feeling if you got him or not. Sometimes the scoring loop isn’t where the finish line is, so I was thinking, ‘oh sh** oh sh**’ and then I looked up at the scoreboard and it had me ahead of him.”

Hughes, of Watts, OK, was looking for his first win in the event and was devising a plan under yellow before the G-W-C finish to ensure he got it.

“There was a lot of stuff going through my head,” Hughes said. “Whether I needed to hit the top and try to mess [Adams] up a little bit. I ran the top a little bit earlier and I wasn’t that good up there, but I probably wasn’t all the way up against the wall like he was.”

The green flag dropped, and the field stomped on the gas. Hughes got a terrific start and put a bit of distance between he and Adams, but Buzzy was hammer-down on the cushion. Maybe even a little bit too much so.

Coming back to the line to take the white flag, Adams closed the gap to just four-tenths of a second as he swung it hard into Turn 1. Hughes looked strong on the bottom, but Adams got a huge blast off Turn 2 and pulled even with him as they reached Turn 3.

The two maintained their lines through the apex of the turn, and just when it looked as though Hughes was going to sneak on by, Adams was shot out of a cannon in Turn 4. He ramped-off the cushion and flew by the start/finish line as the infield scoreboard lit up with “40” at the top. Adams had pulled it off and won the $5,000 finale for the second year in-a-row. This time, by leading just one lap the entire race.

“I’ve been trying for 12 years to win that finale, been second a few times, and last year was definitely pretty neat to do it,” Adams said. “This year was even crazier because, for one, it’s exciting to win a last-lap pass. I don’t care if it’s a Heat Race that pays nothing. It’s fun, it’s adrenaline.”

The pass was indeed exciting, bringing the East Bay crowd to their feet at the checkers. But it was also clean; neither driver made contact with the other in the race to the line, displaying the true competitive spirit and professional conduct that exists between the two marquee dirt racers.

“Jason Hughes is a class act. He could have drifted and pinched me, and I know he could hear me. That’s why he’s been a Mod racer for 30 years, he’s a professional and it shows. I gotta thank him for being so respectful,” Adams said.

Both drivers ran up front the entire race and properly paced themselves in the 75-lap event. After the fuel stop at the halfway mark, Hughes was sitting third behind Tuesday/Friday night winner Drake Troutman and teammate Lucas Lee. Hughes made the pass for the lead on Lap 38 and held the spot until the final circuit.

Hughes didn’t appear to have a rough Lap 75, but he was able to pinpoint one mistake he made that may have been the difference maker.

“I didn’t get down the front-straightaway very good coming to the white flag. I missed the line just a little bit and it spun the tires. That would have been plenty enough to get me back up where I needed to be. It was my mistake,” Hughes said.

“It’s kind of disappointing, but it happens.”

After all was said and done, Hughes crossed in second while Shane Burrows brought it home third from his 23rd starting position. Drake Troutman wrapped up a stellar first trip to East Bay with yet another top-five finish, marking him overall Winternationals event champion.