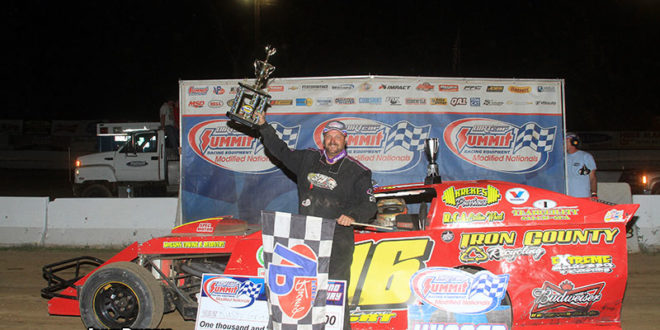 After coming up a few spots short on Friday night at Fayette County Speedway, Griffaw kept the pressure on the rest of the field the entire night by starting up front and capturing the lead early.

Griffaw held off a hard-charging Mike Harrison who managed to set the quick time for the night, but due to a poor finish in his heat, had to rally his way to the front. Harrison charged through the field, eventually getting to the runner-up position, but it would be too late as Griffaw had built an insurmountable lead.

Harrison for the second night in-a-row had to settle for the runner-up position. With only 10 events remaining in the grueling six week-long 2014 DIRTcar Summit Racing Equipment Modified Nationals, Harrison holds a firm grasp in the championship hunt, maintaining a substantial points lead.

Griffaw, who is not running for the championship this year, still found a way to hold off a red-hot Harrison, leading every lap of the 30-lap feature event, and scoring the well-deserved $1,000 checkered flag at Highland Speedway.