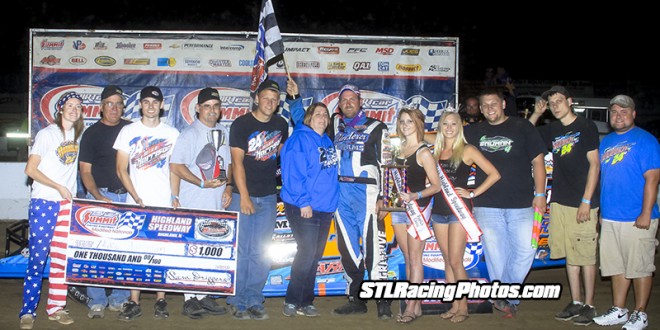 HIGHLAND, Ill. – July 4, 2015 – Mike Harrison was dialed in on the bottom Saturday night at Highland Speedway as he slid inside of leader Brian Shaw on the third lap, held on through two restarts and powered to his sixth victory of the 2015 DIRTcar Summit Racing Equipment Modified Nationals tour.

Harrison, of Highland, Ill., made no mistakes during the 25-lap main event, hitting his marks in every corner as he showed why he’s the three-time and defending series champion who appears to be on his way to a fourth crown in five years after taking another $1,000 victory.

“Summit stepped up to do this deal for us modified guys and it’s been a blast chasing this series around,” said Harrison, who farms during the day. “It’s a lot of fun going to all the tracks. Last year Brownstown and here kind of evaded me, I think I ran second both nights, so it’s good to come to home turf and win in front of the hometown crowd.”

Runner-up Tyler Deibert held off Brian Bielong, who was making the top side of Highland work to his advantage as he kept surging toward the front. Ray Bollinger and Robbie Eilers rounded out the top five.

The DIRTcar Summit Racing Equipment Modified Nationals tour rolls into Tri-State Speedway in Haubstadt, Ind., on Sunday and then heads Monday to Lincoln (Ill.) Speedway, which was rained out on June 28.