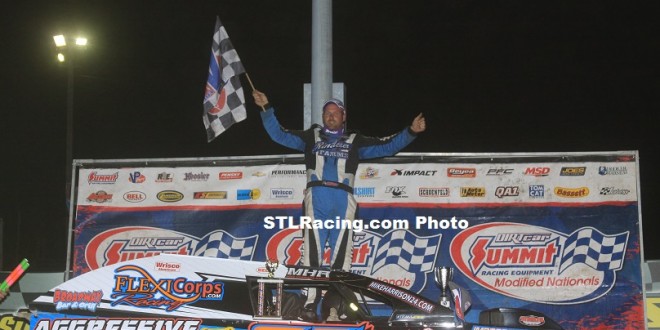 Harrison, who is attempting to win his fourth series championship, started on the outside of the front row and worked the high groove with near perfection as the battle behind him was intense. While Harrison was in charge out front, the top five shook out with Steven Brooks, Jacob Poel, Ray Bollinger and Kenny Wallace.

“I just got my little baby motor in here,” said Harrison, who is locked into a fierce battle with Tyler Nicely for the championship, which counts a driver’s best eight finishes during the tour. “I was really leery of coming up here because it’s a little bit bigger track, but the points and nights are starting to dwindle down and I figured we have to come regardless. Thank God we did because the outcome’s good.”

Follow the Summer Nationals and DIRTcar Summit Modified Nationals on Twitter@SummerNationals or on Facebook at www.facebook.com/SummerNationals, or visit the series’ websites at www.TheHellTour.com and www.ModifiedNationals.com.