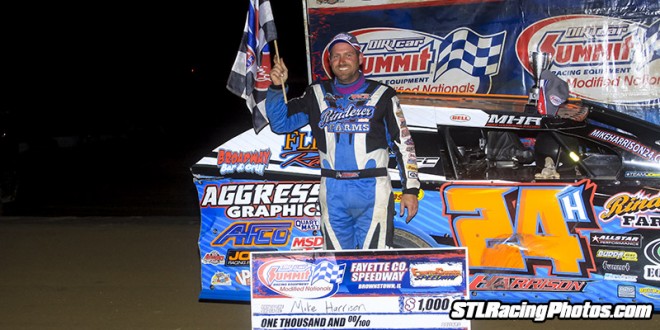 BROWNSTOWN, Ill. – July 3, 2015 – If Mike Harrison winds up winning the 2015 DIRTcar Summit Racing Equipment Modified Nationals crown this year for the fourth time in his career, he might look back on Friday night’s race at Fayette County Speedway as the one that put him over the top.

Ken Schrader and Kenny Wallace led the field to green, but it took Harrison only five laps to power his way around the top and into the lead, where he would survive two restarts, charge to his fifth victory of the season and strengthen his grasp on the overall championship.

“You could say that’s a little home turf advantage there,” said Harrison, who is a three-time DIRTcar Summit Racing Equipment Modified Nationals champion. “I know how this place is and I know if the stuff is right we can usually get around the top of this place pretty good and I think I took them all by surprise a little bit off the bat. I don’t think Kenny thought I was coming around the top there. It paid off.”

The race was Harrison’s seventh during this year’s DIRTcar Summit Racing Equipment Modified Nationals tour and he has five victories. The championship counts a driver’s top eight finishes.