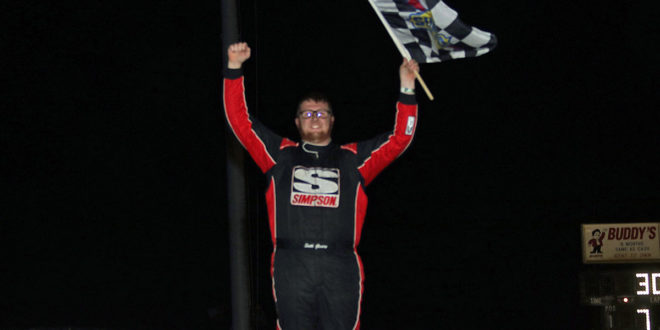 He arrived at the track Friday afternoon, just in time to get through tech inspection and the drivers meeting. By the time the night was out, Seth Geary was standing in East Bay Raceway Park Victory Lane as a first-time DIRTcar UMP Modified Winternationals Feature winner.

It’s the second win of the week for the home-state drivers. Geary, of Bradenton, FL, gets it done just two days after fellow Floridian Bryan Bernhardt parked it in Victory Lane in the event opener Wednesday night.

Geary was unable to join the field for the first two nights of competition due to day job commitments, but he made the most of the limited time he spent on-track – winning his Heat Race, starting sixth in the Feature and taking just 14 laps to pass some of the stiffest competition he sees all year.

“This is at the top of the list, for sure, beating some of the best Modified drivers in the country,” Geary said.

Polesitter Tyler Nicely, of Owensboro, KY, led the field around the third-mile for the first 10 circuits, dodging several pass attempts on several restarts over that period. Then came the hard-charging Brian Shaw, who made two successful pass attempts for the lead and finally wrestled it away on Lap 11. But, it didn’t last.

Sitting third on a Lap 13 restart, Geary got a great run into Turn 1 and threaded the needle between Nicely and Shaw. He dashed right by both down the backstretch and took the lead into Turn 3.

Now holding the lead with half of the race in the can, Geary went into full-defense mode. Numerous caution flags were displayed over the final 15 laps, forcing Geary to be diligent on the restarts. Which, he was, never once being seriously challenged for the lead.

Meanwhile, a charge from the rear was going on behind him. Thursday night Feature winner Victor Lee had a hot rod and was making moves through the field, climbing all the way up to third from 17th in 21 laps, using a bit of strategy and a pinch of good fortune.

“You let these guys make the mistakes a lot of the time,” Lee, of Danville, KY, said. “This track is so treacherous. You move up out of the groove there, or miss the groove, or enter just a little wrong, you really don’t know which way you’re going.”

Geary never missed a beat in the final laps as he led the field back to the checkers to collect a $1,500 check. He’s raced East Bay in the past, so he knows what he’s doing when it comes to the dark dirt of East Bay.

“We raced here at the end of the month last year and we were pretty good,” Geary said. “We just brought out what we had from then, and it just stuck.”

Nicely came home second – a big turnaround from two bitter endings to his Wed-Thu night efforts. He kept the car up front, pointed in the right direction and bagged a solid points finish that will set him up for a nice Heat Race starting spot on Saturday.

“Just finishing tonight is a real big confidence booster,” Nicely said. “I know we’ve got a good car, and I’ve got a good crew behind me. We’ve set quick time every night in our group and won our Heat Races, just haven’t been able to put a whole night together. Tonight was one step in the right direction.”

Lee crossed the stripe in third, locking him into the top-six redraw for the 75-lap, $5,000-to-win championship Feature on Saturday.

“Tore up a little sheet metal, but all-in-all, we’re locked-in for tomorrow, so we’ll get up early and beat-and-bang and get it ready,” Lee said.

After posting consecutive top-10 finishes in the first two races, Buzzy Adams, of Cameron, WI, had a rough go of things in Friday’s Feature. A third-place in his Heat set him 14th on the Feature starting grid, where he eventually got caught-up in a spin in front of him, piling-in and damaging the car’s nose. His crew made repairs, but not before losing a lap to the field, leaving him with a 13th-place finish.

Winternationals points leader Lucas Lee, of Paris, TN, bagged another solid finish in fifth, keeping him locked-into the Saturday finale. Allen Weisser, of Peoria, IL, made repairs to the Lightning Chassis #1 after a rough but impressive drive to the podium on Thursday, driving to a sixth-place run after spinning early on Friday.

The preliminary shows have all been completed, and now the top six drivers in event points will be locked into the big show on Saturday night. Lucas Lee, Victor Lee, Chris Wilson, Drake Troutman, Bryan Bernhardt and Buzzy Adams have earned those honors and will redraw for their Feature starting spots on Saturday night.

The 23rd annual UMP Modified Winternationals finale hits the dirt at East Bay Raceway Park on Saturday, Jan. 29. Keep it locked to DIRTcar social media channels for all the updates.