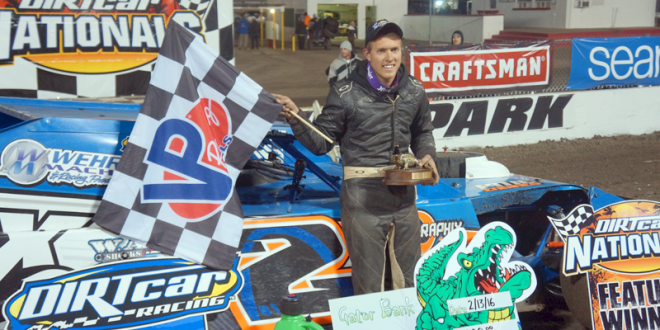 BARBERVILLE, Fla. — Feb. 13, 2016 — Ty Dillon looked to be the driver to beat in Saturday night’s DIRTcar UMP Modified Gator Qualifying feature at DIRTcar Nationals but Nick Hoffman had other ideas as he cruised to his third win at Volusia Speedway Park.
Dillon dominated the early part of the 20-lap modified feature building a large lead over Hoffman and Ray Bollinger. As the laps wound down though, Hoffman, who has been the class of the field at DIRTcar Nationals, closed the gap. As lapped traffic came into play, Hoffman made his move. He battled past Dillon off of turn four and took the lead on lap 16.
Dillon, a driver in NASCAR’s Xfinity Series, tried to close the gap, but Hoffman marched to the win.
“Ty was really good,” Hoffman said. “Once I got to about halfway I started to momentum my car around. It was really good. I think he still would have had me if it wasn’t for that lap traffic deal. We’ll take them as we can get them.”
Hoffman won Tuesday and Wednesday night’s modified features.
One night after his first did-not-finish result since September 2013, Donny Schatz rebounded at DIRTcar Nationals as he battled with Brad Sweet to score his first World of Outlaws Craftsman® Sprint Car Series win of the 2016 season.
Sweet, who won the Outlaws season opener on Friday night, was the class of the field on Saturday as he led 17 laps. Restarts proved pivotal for Schatz though as one on lap 16 eliminated Sweet’s lead and another on lap 21 gave Schatz the opportunity he needed to get around Sweet.
Schatz said he was happy to move past the pressure of the once two-year-old streak and start building momentum toward an eighth series championship.
“It’s kind of a relief to be over that hill of having that DNF that’s been haunting us for I guess 180 races or whatever,” Schatz said. “Now we can just focus on trying to win races.”
“I’d be even better if we could win all of them,” Schatz said. “That’s what this team shoots for, that’s what they aim for, and that’s what they work hard for. We’re here tonight and that’s all that matters.”
Nightly doubleheaders at Volusia run through Saturday, Feb. 20. The World of Outlaws Craftsman Sprint Car Series returns on Sunday for its final night at DIRTcar Nationals. The DIRTcar UMP Modifieds returns for night two of Gator Qualifying.