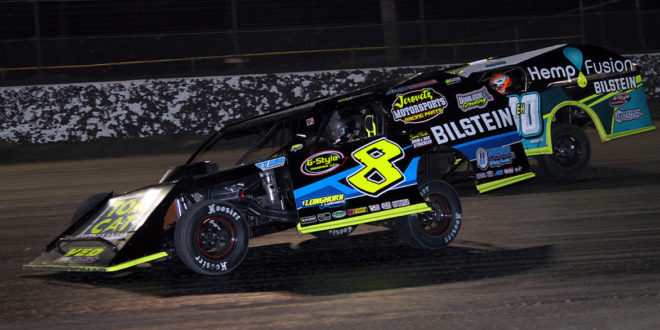 With it hanging on by the skin of his finger, he had to leave Volusia Speedway Park and go to a nearby hospital. His first question when there, “Can I race tonight?”

The answer wasn’t what he wanted to hear: “No.”

Strickler, the eight-time DIRTcar Nationals Feature winner, was set to make his first UMP Modified start of the year during the second night of 50th DIRTcar Nationals. But while putting his #8 machine on the lift, his finger got caught in the life, cutting it three-quarters of the way through on one side and halfway through on the other.

While Hot Laps and Heat Races took place at the track, Strickler was getting his finger stitched up. By the time repairs were made, with a metal splint and ball of gauze wrapped around his finger, there was still time for Strickler to make it back to the track in time to try and transfer his way out of the Last Chance Showdown.

Like seeing an open lane around the high side of the track, Strickler “The High Side Tickler,” ripped the fast lane back to the track, ignoring the recommendation to not race, and hopped behind the wheel of his Longhorn by Loenbro chassis #8 machine – for the first time all year with no practice – to try and race his way into the Feature.

With the thick wrap of gauze around his middle finger, he had to cut off that finger of his racing glove so his new jewelry would fit.

stitched up and headed back to the track. pic.twitter.com/HAJQ4AcYWf

Unaware Strickler was returning, DIRTcar officials were asked to confirm Strickler was actually the one driving the car. One official responded with, “can confirm it is him. He showed me the finger.”

Strickler then went from 13th – last – to second in the 10-lap Last Chance Showdown to transfer his way into the first Feature.

Then, in the 20-lap Feature, Strickler made a jaw-dropping charge from 23rd to third with many questioning the plausibility of him winning if there was a caution in the closing laps. In that time he had to pass the likes of Steve Arpin, Lucas Lee, Kenny Wallace, Matt Crafton, Ken Schrader and many more of the best UMP Modified drivers in the world.

“These Modifieds are so much fun,” Strickler said. “That’s the most fun I’ve had in a race car in a long time. I’m really glad I could put on a show for the people who stayed and braved the cold. We’ll be back tomorrow and be someone to reckon with for sure.”

You can watch Strickler try to put on a show again tonight at Volusia Speedway Park, during night three of DIRTcar Nationals action for the DIRTcar UMP Modifieds – which have a record-breaking 96 car field – live on DIRTVision.

. @dirtvision REPLAY: After going to the hospital and not sitting in the car until the start of the first Last Chance Showdown, @Highsidetickler drives his way to an incredible podium finish in tonight's first UMP Modified feature! #FLinFEB pic.twitter.com/xwtSsPhnTM