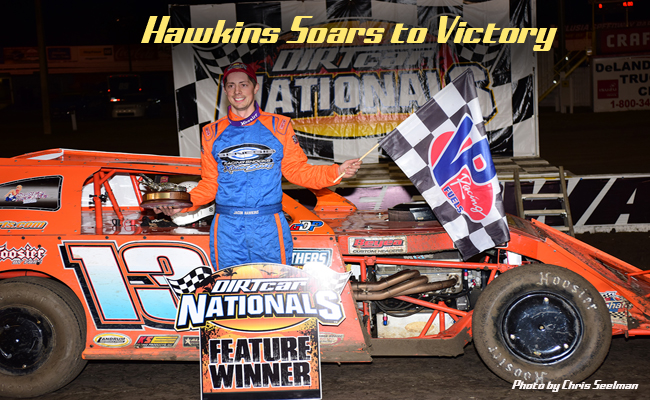 BARBERVILLE, FL – February 15, 2017 – Jacob Hawkins of Fairmont, WV led all 20 laps of the DIRTcar UMP Modified feature to earn his first career Gator trophy and win at Volusia Speedway Park on night one of the DIRTcar Nationals.

Hawkins led the opening lap after starting on the outside of the front row and held off Clarklake, MI-native Brian Ruhlman over the final 10 laps to earn his spot in Victory Lane. Hawkins attributed his success to car owner Junior Nolan who has accompanied him there to Florida Florida in search of a Gator over the last 12 years.

“It hasn’t been from lack of effort,” said Hawkins. “Junior’s given me good equipment every time. It takes a lot of luck down here. There’s so many good cars, you get to run with guys like Ken Schrader, Kenny Wallace and the top talent in the Modifieds. It’s a great feeling [to win],”

Hawkins said. Hawkins overcame a lap 12 restart but had to deal with Ruhlman until the final corner. Ruhlman had the advantage in turn two, but Hawkins had an answer for the driver of the No.49 off turn four.

“I had something for him down in [turn] one and two, but I couldn’t figure out what to do with them down [in three and four]. I was hoping I could make him make a mistake, but I think he knows I’ll always leave him a lane,”Ruhlman said following his runner-up finish.

Arnold, MO driver Kenny Wallace raced his way to a podium finish after starting ninth and was content to finish third behind Hawkins and Ruhlman, he said.

“It was a great job by my team. This is a brand new car. We just unloaded it today,” Wallace said. “We learned some adjustments to make tonight, but when you have Jacob Hawkins and Brian Ruhlman, these are two of the best the United States has to offer. They’re fast.”

Earlier in the night, Ruhlman set fast time in qualifying time trials with a lap of 18.747 seconds around the half-mile Volusia oval. He was also a heat race winner along with Hawkins, Will Krup, Jeff Leka, Ray Bollinger and Scott Kincaid.

Reigning DIRTcar UMP Modified DIRTcar Nationals champion Nick Hoffman raced his way into the 20-lap feature from the first Last Chance Showdown. Contact in Hoffman’s heat race forced him to battle his way in to the show through the back door, but did so in convincing fashion as he advanced from 13th to win. Billy Workman Jr. of Canbury, OH and Kyle Strickler of Mooresville, NC both won Last Chance Showdowns from the pole starting position.

The UMP Modifieds return to action on Wednesday alongside the Arctic Cat All-Star Circuit of Champions for night two of the DIRTcar Nationals.