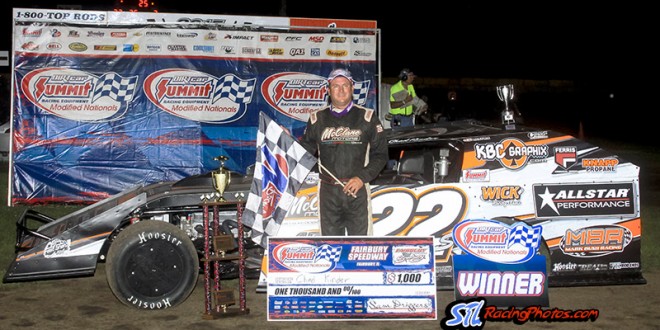 FAIRBURY, Ill. – June 20, 2015 – Chad Kinder used to the top side of Fairbury American Legion Speedway to survive an epic three-car battle with Mike Harrison and Jay Ledford for his first victory of the 2015 DIRTcar Summit Racing Equipment Modified Nationals tour.

NOTE: Sunday’s event at Quincy Raceways has been moved to Monday night (June 22) because of rain. Hot laps are scheduled to begin at 6:15 p.m.

Kinder, of Newton, Ill., started on the outside of the front row alongside Brian Shaw. The two raced wheel-to-wheel before Harrison and Ledford made it a three-car battle. Kinder held his ground through two restarts and powered to victory, worth $1,500.

Championship points leader Tyler Nicely worked his way to second by the time the checkered flag waved with Ledford, Jeff Curl and Harrison rounding out the top five.