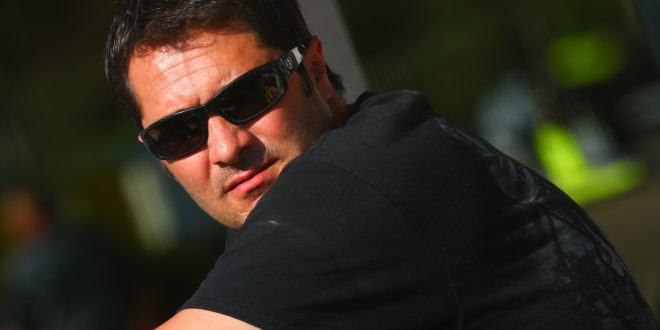 CONCORD, NC – Oct. 28, 2020 – Historically speaking, two men have singlehandedly dominated the Summit Racing Equipment DIRTcar UMP Modified portion of the Drydene World Short Track Championship at The Dirt Track at Charlotte. Both of them just so happen to be from popular motorsports residence in Mooresville, NC – Kyle Strickler and Nick Hoffman.

This weekend, there’s one other Mooresville-native looking to put an end to that string of dominance and begin his own stretch of success at America’s Home for Racing.

David Stremme, 2003 NASCAR Xfinity Series Rookie of the Year and owner/founder of Lethal Chassis, has quite an interesting string of results going into the 5th annual event at Charlotte. Second in 2016, third in 2017, fourth in 2018 and, you guessed it, fifth in last year’s 25-lap main event.

Strickler took the checkered flag in the inaugural year of 2016 and again in 2017, while Hoffman ruled the field in 2018 and 2019. Heading into his fifth event appearance in 2020, Stremme owns the most top-five finishes of any driver in the division without a Feature win.

So many times, so close to victory. But that’s the nature of this event – so many great names come into town and put it all on the line for the DIRTVision cameras on the big stage. With over 400 total cars in the pit area last year, Stremme knows just how fierce the competition can be in every division, especially his own.

“It’s going to be tough,” Stremme said. “When you look at the caliber of drivers that come to this event… I don’t know if it’s necessarily looked at, for the Modifieds, as a “crown [jewel]” race, but it’s still pretty big. A lot of guys getting in their last race of the year.”

Last year, Hoffman wound-down one of the most dominant seasons in DIRTcar UMP Modified history with a flag-to-flag Feature victory, marking back-to-back wins for him in the event. Strickler went on to beat him in the All-Star Invitational just a short while later, while Stremme crossed right behind them in third.

The great runs have been there for Stremme. Most memorably, his charge from 20th to finish fourth in 2018 has shown his strength in traffic around the 4/10-mile. Runs like that are always exciting to watch and really show off what the Drydene World Short Track Championship is all about – the nation’s best local/weekly racers laying it all out on the line for one spectacular show.

“If you look at the quality of the drivers and the teams that come out of this area and what this race puts on… I think the Modified race is probably one of the best out there, just because of the horsepower versus downforce and the track conditions,” Stremme said.

Since 2014, Stremme has been fabricating his own brand of Dirt Modified chassis at his race shop in Mooresville – Lethal Chassis. Some of Lethal’s biggest competition over the past few seasons has been Hoffman’s own Elite Chassis, which occupy four of the top 10 spots in 2020 DIRTcar UMP Modified national points standings.

But Stremme’s a racer and fabricator, not a media headline chaser. Like so many of the sport’s successful veterans, he’s focused on his own craft in the shop and his own affairs on the track. He’ll be gunning for Hoffman just as hard as anyone else in the field.

“I don’t do this racing for a living. We build cars and have fun. We build cars for all four major sanctioning bodies, so I don’t look at just one race and one brand I gotta go after. I look at everybody as a competitor. If it happens, it happens,” Stremme said.

Now in his sixth year of business, Lethal Chassis builds cars for customers all across the country. Eleven Lethal cars have pre-registered to compete in the UMP Modified field at Charlotte this weekend, including the likes of Austin Holcombe, Dan Davies and Curt Spalding, who’s making the long haul south from his home in Watervilet, MI.

Despite his extended network of customers, Stremme has felt the drawback since opening up shop. He doesn’t get as much time to take his own car out on the road to compete as he’d like, but was still able to hit a few DIRTcar Summit Racing Equipment Modified Nationals stops this summer. Even with the pandemic restrictions delaying the season, several Feature wins across the country for Lethal drivers have made a solid year for Stremme and the team.

“We’re happy across the board, but always trying to get better. That’s what makes it kinda difficult – I probably don’t get to race as much as I should. But, when we started this deal, we did it to service other guys.”

Catch Stremme and the rest of the DIRTcar Summit Racing Equipment UMP Modified field in action this Thursday, Friday and Saturday night in the 5th annual Drydene World Short Track Championship at The Dirt Track at Charlotte – LIVE on DIRTVision!