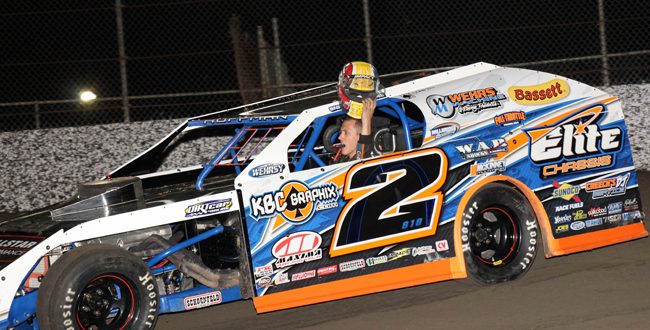 National Championships, Track Titles And Prestige On The Line This Weekend At Eldora

Hoffman and Ruhlman Among the Modifieds’ Leading Contenders

ROSSBURG, Ohio (September 28, 2016) – When the best DIRTcar UMP Modified drivers in the country descend on Eldora Speedway this weekend, the battle for supremacy amongst America’s blue collar racers will be decided as Quincy, Illinois’ Michael Long tries to stave off multi-time champion Mike Harrison, Highland, Illinois, for the National Championship.

Aside from the season-long points campaign, the honor of being crowned the DIRTcar UMP Fall Nationals by Allstar Performance champion awaits the winner of Saturday’s A-Feature.

“There is no place like the stage at Eldora,” said former Fall Nationals champion Nick Hoffman, who will haul from Mooresville, North Carolina for the event.

Additionally, the Eldora track championship is on the line this weekend. Lima’s Jeff Koz, leads Leamington, Ontario’s Joel Dick by a scant 12 points. The top five, which includes brothers Jonathan (3rd) and Evan Taylor (5th) from Saltsburg, Pennsylvania and Middlepoint’s Brian Post (4th) are all within 29 points going into the Modified division’s season finale.

“Any win at Eldora is highly respected as is a track title,” said Brian Ruhlman, who hails from Clarklake, Michigan and is a former Eldora track champion.

Hoffman and Ruhlman will be among the favorites heading into this weekend’s mega event. With a complete program on Thursday and Friday, Saturday’s finale will be set, in part, based on a driver’s best performance from the two preliminary nights. With over 100 entrants expected, it means everyone will have to be on top of their game.

“Winning the Fall Nationals means you’ve beaten the best,” Ruhlman said. “The car counts are great and the competition is very stiff.”

“I feel like the guys you’re going to have to beat this weekend are Harrison, Long, Jacob Hawkins (West Virginia), Kyle Strickler (North Carolina), and Ruhlman,” Hoffman admitted. “Even winning a prelim night now is a huge deal for any racer.”

NASCAR stars Ken Schrader and Kenny Wallace, who have returned to their roots in a big way – by returning to the dirt as full-time racers, have also entered the event. Wallace is currently eighth in the National Standings.

Both Thursday and Friday shows will be complete programs with four A-Features. A driver’s best finish from each of those nights will be used to seed the lineups for Saturday. Championship Saturday will showcase the “alphabet soup” races beginning with the H-Feature as drivers try to advance through those last-chance races and work their way into the $5000 to win main event. The DIRTcar UMP Late Models will also be on the card for Saturday with a full $5,000-to-win program.

The allure of winning the Fall Nationals crown is still something Hoffman reflects on. It was a storybook weekend for the North Carolina driver who built his car from scratch in just 17 days.

“I had never even made the A-Feature at the Fall Nationals until the year that I swept the weekend,” Hoffman said. “I still look back on that day as if it was a Cinderella type weekend. We took a pile of tubing from the tubing rack to the racetrack at Eldora in only 17 days.”

Already known for its ultra-racey surface, the Fall Nationals has a tradition of providing even more three and four-wide racing.

“If the track conditions are like they were for the World 100, the racing will be great,” said Ruhlman, who is tied atop Eldora’s all-time Modified winner’s list. “The Modifieds are very deserving of this high-paying, high-profile race. “There should be a lot of high-quality cars there.”

Hoffman agreed. “The amount of cars that show up for this weekend plus the national points battle makes this race so important. Like always, Eldora will put on a good show.”

Tickets for the DIRTcar UMP Fall Nationals by Allstar Performance are just $12 on Thursday and Friday and $20 on Saturday. Children (12 and younger) admitted free to General Admission seating for all events. Order online at www.EldoraSpeedway.com or by calling the Speedway Box Office at (937) 338-3815.